​Sime Darby is determined to preserve biodiversity in its supply chain. Its initiatives to protect areas of High Conservation Value in its plantations was covered by our previous write up on company operations. In brief, the in situ initiatives have led to higher levels of biodiversity within company owned plantations. This achievement is something that Sime Darby Plantations believes, will add towards the company’s mission of sustainable production. 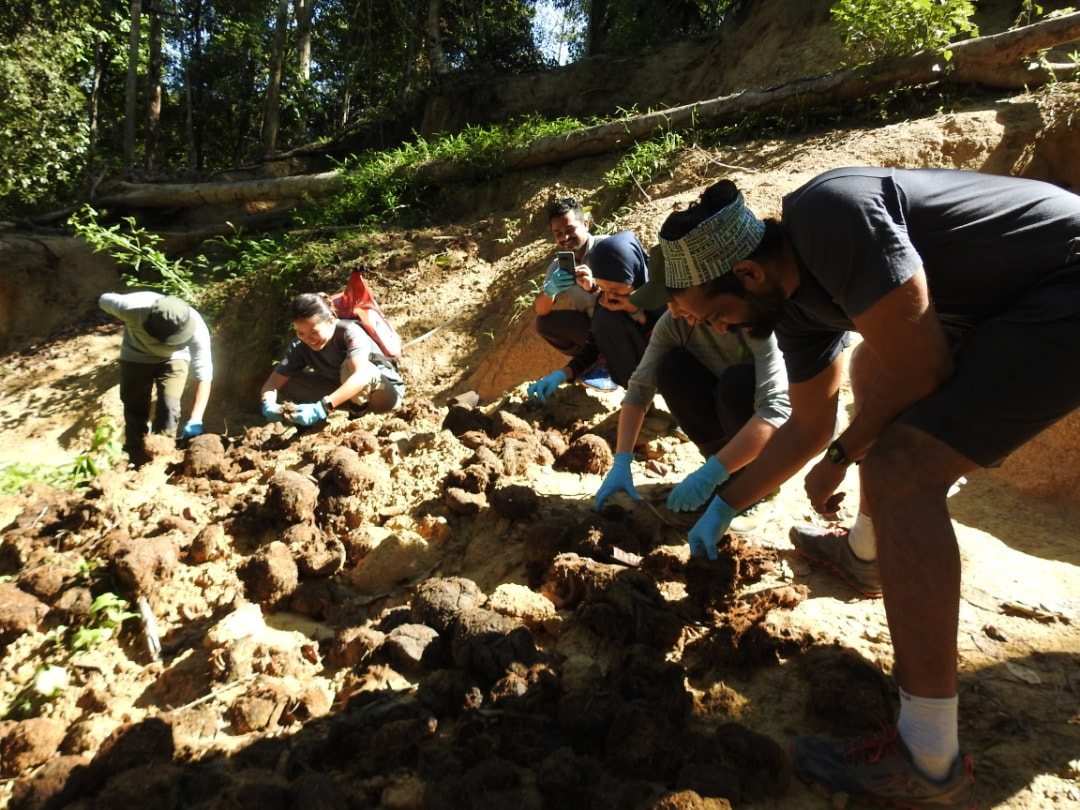 Analyzing elephant dung with Management and Ecology of Malaysian Elephants to find facts for their survival in Malaysia.
As one of the largest producers of palm oil globally, the company has also taken on a remarkable role to preserve biodiversity outside of its operations. This is especially so for fauna and flora species in Malaysia where its philanthropic arm, the Sime Darby Foundation, has provided funding for multiple conservation efforts.

It has given funding to projects from the lesser known banteng or wild cattle of Borneo project with Cardiff University’s Danau Girang Field Centre to the sun bears at Borneo Sun Bear Conservation Centre (BSBCC) to ensure their survival.

Other big mammals that have benefitted from its funding program include the tigers of Royal Belum State Park where Sime Darby is working with Perak state to fight the threat of tiger poaching in the state. A multi year project with elephant conservation NGO, Management and Ecology of Malaysian Elephants (MEME) is looking for long term solutions for elephants in Malaysia. Insider information has said that once the needs of the elephants are better understood, Sime Darby, through its plantations side, plans to roll out a comprehensive plan for human-elephant co-existence that will include all of its operations in Peninsular Malaysia and Sabah.
​
As one of the biggest land mammals in Malaysia, using the elephant to provide clear direction of what needs to be done to preserve biodiversity is justified by the fact that the elephants are custodians of the forests. Research by MEME has shown that the elephants of Malaysia are critical to the survival of forests in Malaysia through the simple act of eating and dispersing tree fruits.
Fauna aside, Sime Darby is aggressively saving endangered flora with its support of the Tropical Rainforest Conservation and Research Center (TRCRC) which is protecting Malaysia’s threatened and rare tree species in both Peninsular Malaysia and Sabah.

Strategic planning in choosing to support a variety of conservation NGOs has now yielded a comprehensive conservation initiative. The results from MEME’s research on elephants is providing key information on what will be needed for their survival in Malaysia. Collaborations between MEME, TRCRC and Perak state as beneficiaries of Sime Darby’s conservation funds is yielding solid results for the preservation of elephants and tigers in the state. This information will be critical for the greater plan to create a lasting habitat for wildlife in Malaysia based on existing governmental plans for conservation in the Central Forest Spine.

Yet, within the complex supply chains of the global palm oil industry, there is always the threat of leakage which could negatively impact its noble goal.

To reduce that threat, Sime Darby launched a global first supply trace through its CrossCheck interactive platform. The platform makes it easy for anyone to zero in on a complaint against palm oil in general, to determine if the complaint has any connection to Sime Darby’s supply chains.

Carrots Will Work Better Than Sticks

As good as the CrossCheck platform is to identify leakage in a supply chain for sustainable palm oil, it remains a reactive solution, meaning that its main function kicks in only when a problem has been flagged. Sime Darby has no shortage of potential leakage in its global supplies as one can see from the company’s Supplier Grievance Register dated March,23, 2019. This level of transparency is laudable but as Sime Darby strives to earn a reputation as the top producer of sustainable palm oil globally, it has to use its influence on its suppliers proactively because nothing inspires good work like being rewarded. It would be remiss of us to report on a supply chain and not come up with suggestions for improvements so here it is.

Closer association with better growers as a proactive action will greatly improve its sustainability credentials in two ways. Firstly, when suppliers are producing a quality above and beyond expectations, there would be no reason for them to appear on the Supplier Grievance Register. The fewer entries there are, the better Sime Darby looks. Secondly, the bonus of an extended conservation impact where Sime Darby supports suppliers on a similar mission to produce palm oil sustainably.

A simple example might be that of Sabah Softwoods, a smallish CPO producer in Sabah which has a large conservation program. The company has forgone revenue estimated at USD7 million when it dedicated 7000 ha of its land to conservation. Yet within the global supply chains of brands like Nestle which counts thousands of palm oil mills, the name Sabah Softwoods only shows up as three blips where it is mentioned as a supplier to Sime Darby.

In a case like that of Sime Darby and Sabah Softwoods, the suggestion would be for Sime Darby to commit to bigger volumes and long term supply contracts with Sabah Softwoods. This would help to ensure that Sabah Softwoods has the funds needed to continue its conservation goals. More importantly, it would inspire other suppliers to raise themselves up to Sabah Softwoods standards if they want to grow their business with Sime Darby.

There is of course the question of logistics and costs which is likely a reason why Sime Darby has minimal contact with Sabah Softwoods. The extra costs, if any, of buying CPO from a mill that is outside of its supply routes must be seen not as an operational inefficiency but rather as an investment into its sustainability credential.

Update August 29, 2019. A 4 million ringgit program from the Sime Darby Foundation is set to fight poaching in the Malaysian state of Sabah.  Read the whole report on BorneoToday.

Note: Field visits to collect information were arranged by the Sime Darby Foundation. Travel expenses and the opinions stated in this article are strictly that of CSPO Watch. August 21, 2019