The world’s biggest palm oil planter, Sime Darby, has released a new “easy tool to check the source” of their palm oil. This is a bold step undertaken by the company to bare itself for all to see.

If it works, the traceability tool will be a challenge for not just palm oil but all commodities that have become a part of our everyday lives. Even as the student strikes for climate inspired by Greta Thunberg continue to occupy the headlines, commodities including beef and soy have been identified as major drivers of deforestation at a scale which threatens the future lives of these students globally.

Why palm oil?
As one of the best performing green oils on earth, the development of the palm oil industry in the past twenty years has led to criticisms of how it causes deforestation and threatens exotic apes like the orangutans or gorillas with extinction. This has put palm oil in the sights of environmental groups which have campaigned against it intensively in the past fifteen years. Recent revelations of soy’s environmental impact has attracted scrutiny to the industry as well. According to supply chain experts, the demand for sustainable consumer products is only beginning.

Sooner or later, European grown vegetable oils in sunflower and rapeseed will come under scrutiny as environmental groups start to challenge the environmental disaster that is unfolding across Europe.

Whether orangutans will face ecological catastrophe due to palm oil the same way that insects and birds in Europe have, is a question that only time will answer. Meantime, the new traceability tool at Sime Darby throws out a challenge to producers of consumer goods from meat to packaging materials that should be answered by those industries.

With operations in eight countries, the presence of its product is almost guaranteed in supermarkets from Australia to Europe. This makes it all the more important for Sime Darby to show with clear certainty, that its palm oil is not associated with any of the accusations usually leveled at palm oil.

Just as the internet has made it easy for the average consumer to research product details, Sime Darby’s tracing tool appeals to that same conscientious consumer to do the research on its palm oil. This sponsored news report ( part of corporate transparency) lists out the ambitions of the tracing tool with quotes from key management. Statements like:

Testing the Sime Darby tool
All of this sounds great so we gave the tracing tool a test drive to see how it works.

We took on the role of that as a concerned consumer who had only recently read about palm oil’s impact on forests and decided to look into the news on the tracing tool at Sime Darby.

An online search for “Sime Darby Cross Check” showed SimeDarbyPlantations as the website to go to. This is not to be confused with the other corporate website SimeDarbyOils where the tracing tool, Cross Check, has not been mentioned yet under the Sustainability or News&Stories tabs.

The correct landing page for “Sime Darby Cross Check” is this one which includes a YouTube tutorial on how it works.
​It is a dynamic tool that exposes the whole Sime Darby operation from the location of its global operations 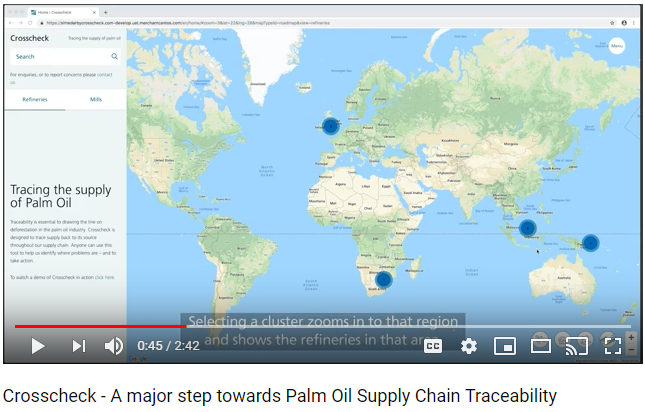 ​To its mills that process fresh palm oil fruits 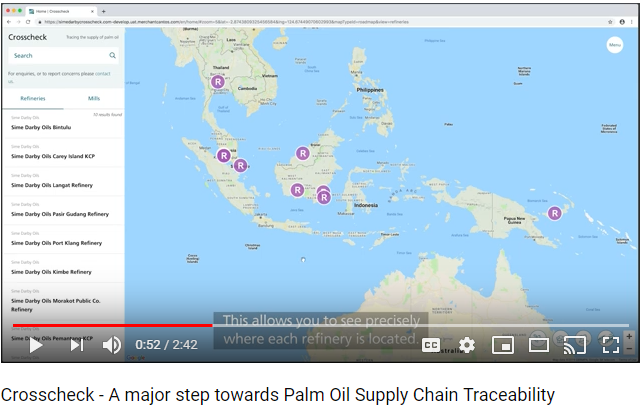 To the suppliers of the mills 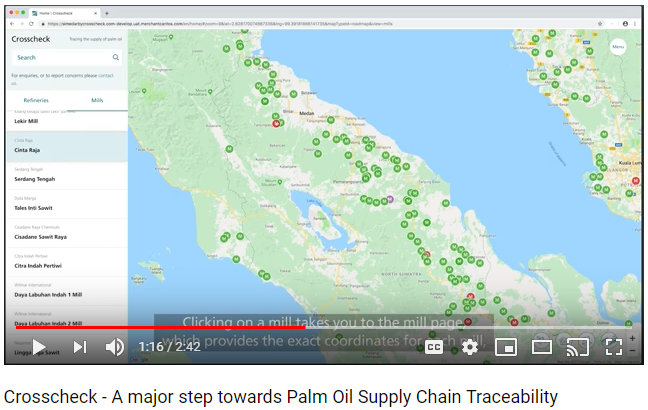 All the way down to whether any of the supply sources might have come from impacted forest areas for example, illegal palm oil plantations. 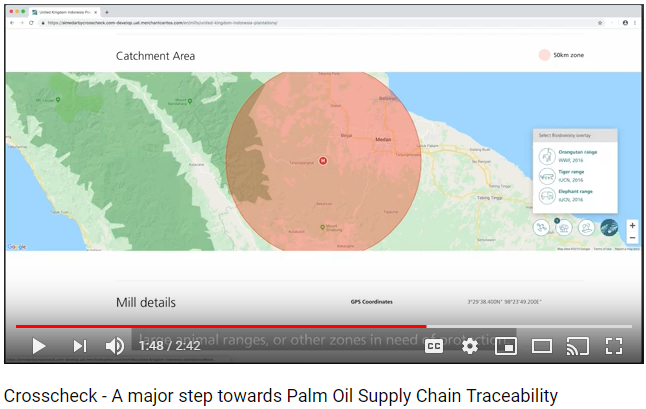 This is corporate supply chain transparency in an extreme format. With inquisitive eyes constantly poring over producers of palm oil, soy, beef and other consumer products, it is doubtful that any other supplier of commodities will go to this extreme to prove the sustainability of their product. This is especially so in the case of palm oil which is mostly used as a side ingredient.

The challenge now is for manufacturers of consumer products to up their game. In the case of the popular chocolate bar for example, it is now much easier for manufacturers to confirm the source of their palm oil from Sime Darby but do not expect that they will do so publicly. The thing is when a manufacturer decides to reveal its use of palm oil as sustainable, it tends to raise questions on the sustainability of the rest of the ingredients.

For multinationals like Nestle, the same Kit Kat brand could be using palm oil or soy lecithin. This would likely bring down demands for their soy lecithin to be as sustainable or transparent as that from Sime Darby.

It is doubtful that the average customer at Tesco or Walmart will go through the trouble to trace their palm oil or soy oil. The point being made by Sime Darby with their Cross Check tool is to open its palm oil supply chain to public scrutiny. With the striking students worldwide demanding action on climate change and the warning from IPBES of a million species becoming extinct, it is important for supply chains globally to show that they are a part of the solution.