​Malaysia Makes Its Case Against The EU at WTO 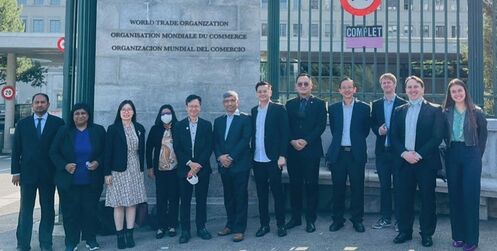 Malaysian delegation at WTO
The sustainability of Malaysian palm oil will be a key focus point for the government which is challenging the EU’s ban on palm-based biofuels at the WTO.

As the Malaysian delegation makes its arguments at the WTO, proactive measures were taken to include key indicators of palm oil sustainability in the country’s national certification program, the Malaysian Sustainable Palm Oil (MSPO) scheme.

These measures include standards on deforestation, peat exploitation and labor rights which are the common accusations aimed at the palm oil industry.
With close to an unprecedented complete certification of all Malaysian palm oil by auditors like SGS, the Malaysian government has effectively addressed the usual accusations of unsustainability against its palm oil industry.
In the specific case of palm-based biofuels, Malaysian exporters of biofuels to the EU have been doubly certified by the EU based ISCC to confirm that no deforestation was involved in the production of these biofuels.

With certified supply chains that provide transparency through the MSPO Trace app and ISCC’s stringent audits, the EU will have a tough time justifying its ban on Malaysian palm oil.
On a wider scale of things, the revised MSPO standards are prepped to address any sustainability demands presented in Corporate Due Diligence proposals as made by the UK or EU.

Beyond the overall arguments at the WTO, the clear establishment of the sustainability of Malaysian palm oil will be needed to correct the misperceptions of EU members states like Germany.

German paper Augsburger Allgemeine Zeitung (AAZ) reported that Environment Minister Steffi Lemke was working with the Agriculture Ministry on a new limit on crops that provide both food and fuel.

"Expanding the production of biofuels from food and feed crops would be detrimental to nature. Forests would have to be cleared or moors drained in order to create new cultivation areas for more fuel,"

The German Minister is clearly unaware that there are untapped supplies of palm oil which could feed global needs for biofuels without impacting land use.

Examples of the untapped supplies can be found in the collaboration between Indonesia’s state-owned energy producer, Pertamina and Japan with three Japanese gas companies to realize a biomethane clean gas project utilizing waste from palm oil that is carbon neutral.

Malaysian scientists and researchers have similarly revealed a large potential for the industry to achieve net-zero emissions through improved efficiencies in oil extraction and the conversion of palm wastes to energy.

Beyond improved processing efficiencies and the conversion of farm wastes to energy lies an even greater potential. This is in the efficiency of palm oil production under smallholders. Smallholders in Indonesia and Malaysia account for 40% of global production but their yields are on average, less than half of that from industrial plantations due to poor management. A report from WRI showed that:

"At the end of the day, a successful shift to sustainable intensification can help Indonesia achieve two victories: it can quadruple oil palm production by smallholder farmers, which can eventually improve smallholders’ income, and significantly prevent deforestation and peat degradation from palm oil expansion by 8.2 million hectares. Investing in intensification thus has the potential to protect the environment, bridge the gap between current production and future demand, and provide a secure future for smallholder farmers who rely on palm oil for their livelihoods."

The same situation exists in Malaysia where on-going efforts by the government to increase smallholder yields is bearing fruit but Malaysia has a unique growth potential that requires not more land but labor.

Labor shortage in the Malaysian palm oil industry is not a recent problem. The acute labor shortage due to travel restrictions in pandemic times have highlighted just how much potential harvests are being lost.

Industry may lament the lost income potential but in the wider scheme of things, the Malaysian government has to show that the revised standards for the MSPO which includes Protocol 29 of the International Labour Organization must be enforced.

Accusations of forced labor has been a problem for the Malaysian palm oil industry, resulting in import restrictions imposed by the US CBP. As the EU clamps down on imports produced through forced labor, it is important for the Malaysian industry to forego the bright appeal of high profits in the short term, for the longer-term acceptance of the sustainability of its palm oil.

The arguments between Malaysia and the EU at the WTO is an issue that calls for lasting solutions. By sticking to its guns behind the MSPO, Malaysia will have a better chance of winning its case against the EU at the WTO.