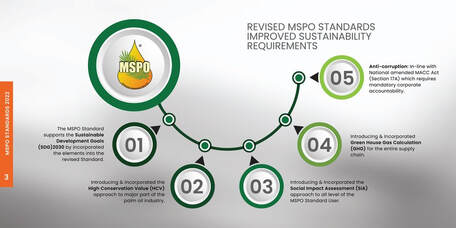 ​According to The Grocer UK:

“Major suppliers have warned they have “just days” of sunflower oil supplies left, as emergency talks called on the government to relax rules on the controversial use of palm oil as a substitute.
Industry leaders met with Defra yesterday, but were told the government was still not ready to allow the so-called derogation of enforcement on labelling rules, amid concerns over the prospect of a consumer backlash.
Clearly there are concerns about a backlash over using palm oil, but if you asked suppliers whether they would rather stop production and send their workers home or use palm oil, I know what the answer would be.”


Sainsbury’s is only the latest of UK supermarkets to warn of supply chain disruptions which may lead to a wider use of palm oil in its products. While the shortage of sunflower oil is expected to be a short term problem due to the Ukraine crisis, it does provide the Malaysian government an unexpected opportunity to showcase the sustainability of its palm oil.

As a backgrounder, Malaysia has enjoyed close ties with the UK as a former British colony. The palm oil industry in Malaysia was actually initiated by the British which brought oil palm seeds from Africa to Malaysia. Some of the early farm buildings still exist in Malaysia as heritage buildings.

As one of Malaysia’s key export revenue sources today, the close ties between the UK and Malaysia are evident. In the Brexit turmoil, the Malaysian government offered its support to the UK in a column for Bloomberg Opinion.

“The key is to rethink the European Union’s policy on palm oil. A fresh attitude toward palm oil, unencumbered by influential special-interest groups, could lead to even better trade terms between the U.K. and the region than it currently enjoys. Even if a trade war transpires, that doesn’t mean the U.K. has to get caught in the crossfire.”

As the Ukraine war threatens food supplies in the UK, the current Malaysian government has reiterated its support for the UK. The Daily Express reported that Malaysia has offered to help ease a crisis in cooking oil supplies for the UK by selling it controversial palm oil.

“Malaysia, though, has argued that its palm oil is produced in more carefully monitored processes than some other countries, which means the rainforest is not impacted and rare species are protected.”

Malaysia’s arguments for the sustainability of its palm oil is now backed by the revised MSPO standards. The revised standards were a proactive move to show its credibility as the Malaysian industry was aware that it would have to prove itself against new trade measures being proposed by the EU and the UK under Corporate Due Diligence.

The vegetable oil shortage in the UK has expedited the opportunity for the MSPO to pitch its case as a sustainable product. Convincing Defra UK that it is, should not be expected to be an easy task even in the face of food shortages for UK consumers. This is not because of a lack of strength in the standards of the MSPO but because the MSPO is a pioneer in product certification as a nationally mandated sustainability scheme. The scheme can be better understood against the overarching framework of the Global Framework of Principle for Sustainable Palm Oil, which it wants to be used as a reference for palm oil sustainability across the globe.

But beyond the goals of the GFP-SPO and the current vegetable oil shortage lies the bigger problem of climate change. Agricultural powerhouses like Canada are starting to look at their agricultural industries which was recently identified by the government as “one of the highest levels of emissions intensity” among exporting countries. Australia, as one of the major sources of rapeseed for the EU has the dubious achievements of being the only developed country on the world list of deforestation hotspots with stark warnings of its failure to address Australia’s extinction crisis.

As a common replacement for palm oil, rapeseed producers will undoubtedly come under scrutiny once Corporate Due Diligence rules are put into place. This bodes well for palm oil producers where certification schemes like the RSPO and MSPO with their respective traceability features puts them ahead of other oilseeds crops.

The Malaysian palm oil industry is far ahead of the game as industry stakeholders work towards another pioneering move in achieving net-zero emissions as we reported earlier. The move towards net-zero is of long term importance as the UK moves ahead with mandatory climate plans for companies.
​
This makes it a compelling argument for the Malaysian government to present itself not merely as a commodity that can fill market supply gaps due to wars or climate change. For the long term, UK supermarkets like Sainsbury’s can stop being apologetic about using palm oil if Malaysia can reassure its global buyers that Malaysian palm oil is sustainably produced to global standards.