​On World Orangutan Day 2019, there is much to celebrate as solid actions to preserve their forests have taken place in the past year.
The biggest announcement came from Indonesia, where orangutans are found in both Sumatra and Kalimantan. The President of Indonesia signed a permanent moratorium which will protect 66 million hectares of forests against further development for palm oil or timber. 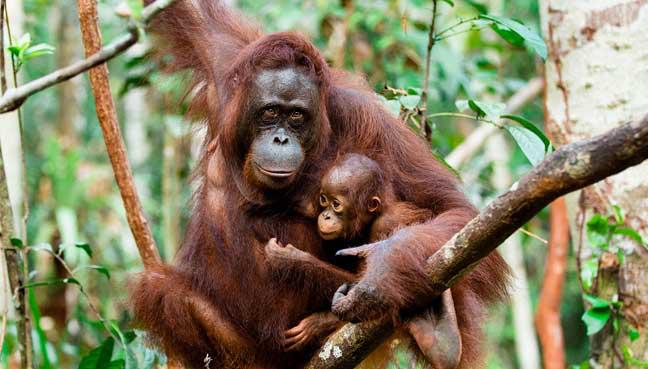 Orangutans in Malaysia
Critics have advised caution in celebrating the news as licenses issued prior to the moratorium may still contain large areas of intact forests. While the traditional role of forest keeper for the palm oil industry in Indonesia has been the RSPO, cautious celebrations for the orangutans in World Orangutan Day 2019 are justified by a spate of news on how the Indonesian government’s pledge to protect orangutan habitats has influenced industries to save orangutan habitat on licensed areas. Multiple reports on individual companies that have preserved large swathes of their plantation areas for orangutans can be accessed on Foresthints, an English language news portal based in Indonesia.

As the palm oil industry in Indonesia continues its efforts to produce palm oil sustainably, efforts to preserve in orangutans and their habitats in Malaysia provide confidence in saving the species.

Sabah state for example, is one of the biggest palm oil producing regions worldwide. It has achieved this with a planted area of approximately 1.5 million hectares with a yield per hectare that is higher than most palm oil producing areas. The early development of the industry in the 1990s saw what can only be described as random licensing of areas for palm oil. As the industry matured and the demand for sustainable production of palm oil rose, the industry has responded in recent  years.
A study on orangutan populations from 2002 to 2017 showed that the orangutan population in Sabah is stable. The study did find orangutan populations in palm oil landscapes have fallen, which should not be surprising as the populations studied were in an area zoned for development. The Sabah Wildlife Department has disagreed privately with the finding of falling populations by saying the two year study was limited in areas studied.

Data from their studies which has been conducted across the entire state in the past ten  years showed there was cause for concern for isolated populations of orangutans but where their data conflicted with that of the recent study was that as orangutan populations increase in these isolated populations, orangutans, especially young males, move out of the congested areas to establish their own families or groups.

A new initiative by the Sabah Wildlife Department to firmly establish the population and habitats of the orangutans in Sabah is slated from 2019 to 2021. With the support of the palm oil and timber industries in the state as well as the state government, the wildlife department is confident that it will find the “lost populations” mentioned by the WWF study as new populations in areas that previously did not have orangutans.

This brings up a new challenge to the Sabah state government which has pledged to preserve orangutans. It may have to do what Indonesia has done and dictate to industries that areas previously licensed for development may need some returned to conservation.

The same has occurred in Sarawak which counts some 3000 orangutans in the state. A study by the World Conservation Society that was concluded in 2018 indicated new areas being populated by orangutans. The new areas were promptly gazetted by the state government to protect the newly found orangutans. This follows an early commitment by the Sarawak state government to protect all orangutan habitats.

Orangutans in Sarawak, Malaysia
​The word now in Sarawak for the orangutans is an ambitious goal to connect all known orangutan habitats. According to the Sarawak Forestry Corporation (SFC) which manages all protected forests in Sarawak, there is a need for increasing populations to mix with other populations to prevent the ghastly prospect of extirpation by isolation. This is where an isolated population has such a shallow gene pool that over generations, with inter-breeding further reducing the gene pool, that future generations will not be able to reproduce.

The success of the orangutan rehabilitation program in Semenggoh for example, has led to an over-population in the area. Similarly in Ulu Menyang where a new population of orangutans was discovered in recent years, the Sarawak Forestry Corporation has acknowledged the problem with interbreeding among a closed population. To ensure their long term survival, the SFC is reaching out to global conservation groups to help with the SFC’s goal of creating wildlife corridors so that isolated populations of orangutans can gain access to the bigger populations like those found in Batang Ai.

Actions like these to save the orangutan is likely why the cries of orangutan extinction have been muffled for World Orangutan Day 2019. The news reports on the looming extinctions of biodiversity in European regions that produce palm oil substitutes might have something to do with that. Reports of koalas being declared “functionally extinct” in canola producing Australia might have added to the worries about rapeseed as a replacement for palm oil.

Unfortunately for koalas, their survival does not have the support of the average Australian consumer who would favor the orangutans over koalas. The catastrophic forest collapse in Australia was reported in 2012 but a general lack of interest in saving them has resulted in Australia being named as a global deforestation hotspot in 2018.

Set against this backdrop where the commitments of the Malaysian and Indonesian governments to save the orangutans are succeeding, the orangutans will survive long after koalas.But not going extinct should not be a place where we rest.

Whether it is conservation actions by the official custodians of the orangutans in the governments of Malaysian and Indonesia or the certification impacts of the RSPO or MSPO, we have to let the inherent human instinct for having more kick in. Sure, the orangutans are safe on World Orangutan Day 2019 but as consumers who can influence what industries and governments do, there should be a demand for even better news for World Orangutan Day 2020. That would be an increasing population of orangutans.