If you have never heard of WALHI, the acronym stands for “The Indonesian Environment for Environment.”. As the group marks thirty-seven years of activism in Indonesia, it has become one of the most influential groups in speaking up for social and environmental justice in Indonesia.

WALHI’s extensive scope of work covers the rights of people, empowering women, sustainable livelihoods and environmental issues. Established in 1980, it is now one of the largest non-profits in Indonesia with independent offices and grassroots constituencies in twenty-seven provinces in Indonesia. Their most prominent work is to support local communities in agrarian conflicts to ensure the access of local communities to natural resources and the preservation of indigenous customs. 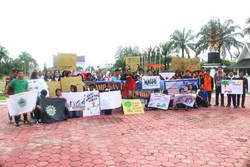 In marking their anniversary, WALHI reiterated their call to implement land use reforms that would halt land grabbing and overwhelming land control by the big industries. Citing the situation in Kalimantan this week, the group revealed that 5.1 million hectares of land in South Kalimantan’s total land area of 15.3 million hectares is controlled by only ninety-one private companies. Given that 200,000 hectares are under reforestation activities with an additional 25,000 hectares under a REDD carbon credits project these special areas still deny local communities their traditional means of survival in farming and foraging.

I wanted to know more about WALHI’s campaigns so I reached out to the Central Kalimantan office, WALHI Kalteng and asked them to share more information with us. The details of our discussion is posted below.

On their call for Land Reform, I asked WALHI what land reforms they would apply if the decisions on land use was under their control.

WALHI The issue of land monopoly by corporations as well as the inequality of land ownership in Central Kalimantan is the main reason for running the Land Reform campaign. Data from WALHI Kalteng indicates that Corporations have at least 76% (+ 12,862,922.Ha) in the form of concessions. So Land Reform is the only way to enable society their fair share.

The steps we will apply:

1. Acknowledgment of the Governing Rights (People's Governing Territory) that has been threatened or confiscated

2. Limit the scale of land tenure by corporation

ROBERT. From my personal experience, the decentralized government has caused a lot of confusion as Jakarta's plans may not be the same as the Regent's plan.

- Also some land claims by indigenous peoples appear to be excessive; for example, a village of 200 families requesting 50,000 hectares under customary forests but historical claims permitted by the forestry department allow less than 5,000 ha for villages with 200 families

WALHI. Jakarta's approach to determining the extent of customary forests is based on what is happening in Java. This approach cannot be used as a reference in the determination of customary forests in provinces such as Central Kalimantan. This is because social institutions and cultures are very different in Java which has a dense population on very small land area.

ROBERT. The campaign for sustainability.The use of sustainable resources is mentioned in WALHI's Vision and Mission. How does WALHI define the sustainable use of natural resources?

WALHI. Sustainability or sustainable use of natural resources cannot be excessive or exploitative and must meet the people's needs

WALHI. All this time, development has always been an excuse for governments and corporations to seize the land of the people or the rights of local communities. The excessive focus on Industrial exploitation of natural resources does not bring the shared development it promises. The Indonesian government is bound by many of its own declared principles which emphasize respect for the rights of local communities but the question is how far will the government go to apply those principles?

ROBERT. Sustainable Palm Oil. The palm oil industry is often mentioned in agrarian conflicts which is not surprising as palm oil is one of the biggest industries in Indonesia. The government is arguing its right to develop oil palm based on poverty alleviation.

- I have personally seen some cases in Kalimantan where local communities are happy with the oil palm industry. At the same time there are many reports of conflicts on land and labor.
​
- Does sustainable palm oil such as RSPO or ISPO help resolve common conflicts on land claims, labor issues, etc.?
WALHI. RSPO has become a separate opportunity in the process of conflict resolution, but has not been able to provide solutions in the field at community level. Conflict resolution through the RSPO mechanism has not been able to resolve the root cause of land conflict (land grabbing) that occurs between society and the company. While ISPO has not yet been clear about the process of resolving land conflicts.

ROBERT. Requirements for industrial plantations to provide plasma plantations should be a boost to local communities, what does WALHI think about this? I have heard that some villagers are happy with it but others say that work on the plantation is too hard. I also see cases where industrial plantations start developing their plantations even though they have no land for plasma areas. The last case I saw was PT Harapan Barito Sejahtera in the north of Barito district where their initial report to RSPO states that there is no land for plasma. In my opinion, the plasma area must be confirmed before the plantation begins.

- Many companies have always said there is no land for plasma development, so the company always asks the district government and local people to make available land for plasma plantations. How can the people offer more land when their land has already been taken over by the plantations estate?

- The plasma plantation process also creates a new financial burden on local communities, wherein the company's loan to the Bank for plasma development is charged to the community. This means that community harvest from plasma area has to first pay off bank loans. Although many communities have agreed to the plasma process, this is likely due to the fact that the companies have not disclosed the full facts on plasma plantations in detail and quite often makes it look like there is no choice but to accept plasma plantations.

- We at WALHI see that the main thing we need to campaign on to bring economic improvements and conflict resolution is for the government to acknowledge that the best governance of land is by the community. Even if the community chooses to accept palm oil development, community governance means that the land management will bring more benefits to society and empower these communities to build themselves up.

That concluded my discussion with WALHI. It was enlightening to see things from their point of view. Here’s wishing them success in their ongoing campaigns for social and environmental justice in Indonesia. As the palm oil industry continues to feature small farmers, let’s hope the Indonesian industry will accept WALHI’s position and return land governance back to the people of Indonesia.