Palm Oil in Geopolitics. Malaysia Caught in the US-China Crossfire

The on-going struggle between the US and China for economic and political influence in Southeast Asia is leaving a victim in its wake: Malaysian palm oil. 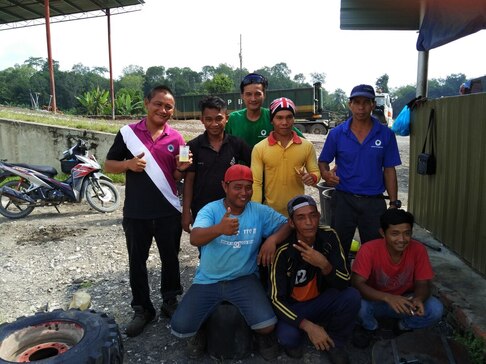 Migrant workers in a Malaysian palm oil mill
US Carrots and Sticks for Geopolitics
The US had flexed its economical clout as US investments in Malaysia soared seven times in recent years, reflecting a diversion of funds due to the Beijing-Washington trade clashes.

To make a point that the US is also capable of economic actions, the US through its Customs Border and Protection (CBP) department slapped sanctions against two of Malaysia’s biggest palm oil companies.
​
Palm oil is an industry that brings in critical export revenue and is a key livelihood for hundreds of thousands of Malaysian farmers. Knowing full well, that the palm oil industry is an Achilles heel for Malaysia’s foreign policy the CBP targeted FGV and Sime Darby Plantations both of which have close ties to the government.
​This is not unsimilar to its sanctions against CNOOC based on the “violations of international standards.”

In its decision to issue Withhold Restriction Orders (WRO) against the import of palm oil from FGV and Sime Darby, the CBP claimed that both companies were “reasonably” suspected of violating international labour standards as set by the International Labour Organisation (ILO)

Why was FGV and Sime Darby targeted by the US CBP?

Both companies may have gotten too close to China. FGV in recent years signed MoUs with different Chinese entities to promote pulp and paper machinery, palm oil products and even palm oil on the Dalian Commodity Exchange. None of these were realized but it must have rung alarm bells that FGV was trying hard to cosy up to China. FGV’s attempts to grow its business with China does not explain the CBP’s WRO against Sime Darby.

As the first company to draw up a human rights charter with a high ranking on human and labour rights by SPOTT, Sime Darby Plantations may have been guilty by association simply because it is a premier brand for Malaysian palm oil.

The WRO against FGV may have little consequence on its overall business but for Sime Darby, the concern is not about US sales but its sterling reputation which has been built up at a cost of millions of dollars annually in its CSR and certification programs.

Sime Darby remains confused as to what the exact allegations of its labour abuse are.

In light of the millions of illegal workers toiling in US agriculture to keep the industries alive with legal migrant workers exploited and blamed for the spread of Covid19, should the CBP have understood that no country or industry can be without some rogue elements?

A better question from Malaysia to the CBP might by why no Indonesian palm oil companies have been placed under a WRO when labour abuses in Indonesia’s palm oil industry are also problematic.

The Malaysian government which conducted a study on labour abuse using methodology endorsed by the ILO showed that forced labour was less than 1% in the Malaysian palm oil industry. No industry or company can be expected to be 100% free of labour abuse or sexual harassment.

Geopolitics and Malaysian palm oil as a pawn in US-China relations
​
The WROs against Malaysian palm oil companies is an obvious message from the US that it is not happy with the quiet diplomacy that Malaysia has chosen in its approach towards China.

Indonesia by comparison, has not only filed diplomatic protests against China’s encroachments into its maritime territories but have gone to the extreme of arming its civilian maritime force as an additional show of force to protect its territories.

Malaysia has only recently started to take on a more aggressive stance against Chinese incursions into its maritime territories. However, punitive action against Malaysian palm oil companies may actually serve to weaken this stance.

The signing of the Regional Comprehensive Economic Partnership (RCEP) in late 2020 has strengthened China’s economic influence in Asia Pacific. Countries like Malaysia could well use a counterbalance from the US. Placing Malaysian palm oil companies in the same holding cells as Chinese companies operating in Uygur region is not the way to persuade Malaysia to rattle its sabres more often.

Sime Darby Plantation Files Application Against NGO for Withholding Vital Information That Would Assist Plantation Workers
Kuala Lumpur, 11 March 2021- Sime Darby Plantation Berhad (SDP) commenced legal proceedings for discovery of critical information against Duncan Jepson on 9 March 2021 in the Eastern District of Virginia, United States of America. The purpose of the proceedings is to obtain important information pertaining to a complaint filed by Jepson with the Securities Commission of Malaysia, in which he alleged wrongful disclosures in SDP’s Sustainability Report 2019. Jepson is and was at all material times, the managing director of Liberty Shared a non-governmental organisation (NGO). SimeDarbyPlantations​