The Malaysian Minister for Plantation Industries and Commodities Minister (MPIC), Datuk Zuraida Kamaruddin has been quoted in local media as saying:

“Although there has been some increase in the European Union’s (EU) awareness of sustainable palm oil and the Malaysian Sustainable Palm Oil (MSPO), there is still not enough understanding of the metrics or of its successes.” 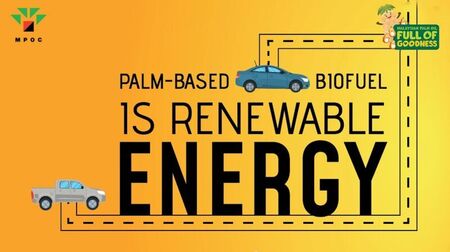 Malaysian palm oil biofuels
The EU has an excuse for not knowing enough about the metrics or successes of the MSPO as what little information that is disseminated by the Malaysian palm oil industry is buried deep by the barrage of criticism against palm oil in general.

As trade policies governing sustainable imports ratchet up in the EU, Malaysia has to ramp up its information campaigns if the Malaysian Sustainable Palm Oil (MSPO) certification is to achieve market acknowledgement.

The EU Commission published its report to the EU Parliament on June, 03, 2022 titled “REPORT FROM THE COMMISSION TO THE EUROPEAN PARLIAMENT AND THE COUNCIL”

​
Within the report are issues that relate directly to the export of palm oil to the EU under heightened levels governing sustainability. Most pertinent among these are highlighted below.

4.2. Bilateral cooperation and trade agreements65
The EU pursues targeted cooperation with partners who are willing to improve the sustainability and quality of their local production (including better management of compliance with EU standards and measures to increase the value of their products on the global market).

5. CONCLUDING REMARKS
Today there is a broad consensus on the need for a transition to sustainable and resilient food systems. The EU, with its ambitious Green Deal and as a global player on the agri-food markets, plays an important role in steering that global transition. The COVID-19 crisis and Russia’s invasion of Ukraine have exposed vulnerabilities of agricultural and food systems that need to be addressed by accelerating the shift towards a sustainable and resilient EU food system.

The EU will continue to ensure coherence of its sustainability agenda with its enlargement, neighbourhood and development policies. This also implies taking into consideration trade impacts on third countries. Flanking measures, including funding, technical cooperation and capacity building, may be important to assist trading partners when engaging in more sustainable practices, especially for most vulnerable countries and neighbouring partners that undertake ambitious commitments in those fields.

In essence, to be justified under Article XX GATT, a measure must be necessary to achieving one or more of the covered policy objectives, must treat domestic and imported products even-handedly and not have protectionist elements.

Looking at the points raised in the EU Commission’s report, it is obvious that the ambitions of Malaysia and its palm oil industry are aligned with those of the EU.

For example, geolocation of Malaysian palm oil origins can be done through MSPOTrace which is also available as a phone app.

As for ambitious partner commitments, the Malaysian government allocated funding of RM50 million towards the mandatory certification of all palm oil operations with a focus on smallholders. This is clear evidence of Malaysia’s commitment to the sustainable production of palm oil.

As for treating domestic and imported products even-handedly without protectionist elements, it is not known at this time whether France’s ambition for “mirror clauses” will be accepted. The quality of the EU’s environmental ambitions under its Common Agricultural Policy has indeed been criticized as inadequate which means that any mirror clauses may be challenged by environmental groups.

We are pleased to see that the European Commission (EC), after a thorough impact analysis and considering all perspectives, has retained a mandatory due diligence system, relying on a deforestation-free definition, combined with a benchmarking system. First, this requires companies to trace the products in their supply chains back to their point of origin. Second, products need to be produced in compliance with the deforestation-free definition and with the laws of the country of production, which according to the Proposal’s Explanatory Memorandum “entails that labour, environmental and human rights laws applicable in the country of production (both national and international) need to be taken into account when assessing the compliance of products with this initiative.” Finally, we applaud the fact that the EC, after thorough consultation, maintains a standpoint “that legally binding options would be more effective than voluntary measures (like voluntary due diligence, voluntary labelling, or voluntary private certification)”, so that companies cannot hide behind certification.

The Malaysian Sustainable Palm Oil scheme or MSPO as its more popularly known as, meets the requirements in matching mandatory due diligence with its mandatory certification for all Malaysian palm oil operations. Its supply chain is transparent and traceable as mentioned previously. While the definition of deforestation-free remains an open question, it must be gratifying to the Malaysian industry that the strength of the MSPO which is based on the laws of the country has found some support.

As the first of its kind in certifications, what can the Malaysian government do to convince jurisdictions like the EU that the MSPO is a credible scheme?

Three things that Malaysia must do for global acceptance of the MSPO can be prioritised as:
The importance of communications cannot be overemphasized.

There used to be a time when one could turn on the radio or TV or read daily newspapers to find the truth on what’s going on in the world. That time is long gone as news outlets including some of the biggest global ones prey upon woke issues to generate revenue through clickbait and advertising.

The fallout from not having a strong communications program to support the “metrics or successes” of the MSPO is best exemplified by the US CBP actions against Malaysian palm oil companies.

In the latest news report on the US CBP decisions, Eric Choy, acting executive director, trade remedy law enforcement at the CBP’s Office of Trade was quoted as saying:

It is evident that the US CBP was heavily influenced by sensationalized pieces like AP’s “Palm oil labor abuse linked to top brands and banks.” The report tried to sound credible by declaring that it interviewed hundreds of workers. Coming from a workforce of millions, this is a miniscule number that should not have casted aspersions on the industry.

As it stands, reports like that and others are being used by governments, NGOs and netizens to paint the whole palm oil industry black.

Media impartiality is a problem when ignorance is given the same weight as expertise. We live in an age in which veneration of dangerous stupidity has moved into the mainstream. The British broadcast media has, in recent years, seen the noble journalistic principle of impartiality become confused perilously with the altogether trickier issue of false equivalence.

Any problems the US CBP found with Malaysian palm oil companies is expected to be resolved with the formation of a working committee. The timing could not have been any better as critical elements in labor issues fall into place in Malaysia.

These are critical developments as the US comes down hard on forced labour.

It is true that the EU places less weight on labour issues than deforestation but the development of worker’s rights in Malaysia is a key factor in the sustainability of its palm oil industry as a major employer of impoverished people from the region.

Strong communications will be needed by the Malaysian government to make sure that the EU does not miss these developments in the Malaysian palm oil industry.