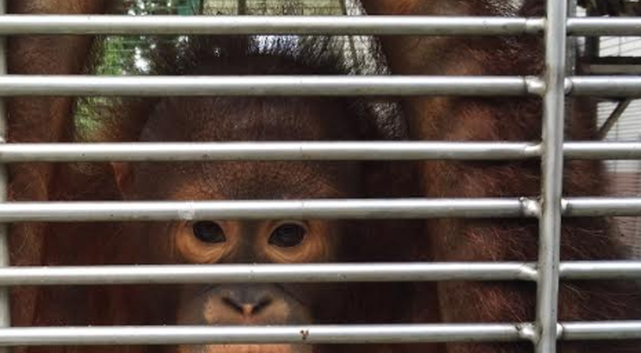 Orangutan waiting for help that will not be coming from Selfridges
​Did Selfridges just Throw the Orangutans under the Bus?

Selfridges, the UK department store, may have thrown orangutans under the bus when it decided to remove palm oil from store branded merchandise.

News coverage of the issue by Vogue, talked up the store’s environmental missions including the clothing that Selfridges sells.

“Selfridges tries to keep its brand at the forefront of ethical and environmental issues.

The British department store has been fur-free for a decade and plans on banning exotic skins – with the goal of phasing out all products made of python, lizard, crocodile skin and python, and only selling leather from agricultural livestock – by 2020.”

Being fur-free and striving to ban exotic skins from its store offerings is easy enough but to be a leader in ethical and environmental issues while selling leather from agricultural livestock like cow or pig leather will prove to be more difficult for Selfridges than their demand to see deforestation-free palm oil.

The thing with cow skin or pig leather is not just in the intense cruelty afflicted on agricultural livestock but in the environmental disasters associated with their feed.

Looking at bovine leather for example, Brazil is one of the top exporters of bovine leather and also one of the top countries for deforestation caused by the cattle industry. Even if Selfridges was to attempt to reduce its brand impact on animal skin and work exclusively with British farms, there is still the question of animal feed from Brazilian soy or the intense animal cruelty associated with livestock farms in the UK.

Waking up the monsters in other ingredients

The intent of Selfridges may be good. After all, the average British consumer’s ecological footprint continues to be much larger than most of the human population but picking on a side ingredient like palm oil, is not going to contribute anything to its stated mission of  “buying better to inspire change.”

Its Selfridges Selection Traditional Mince Pies for example, lists palm oil as mixed into vegetable suet containing sunflower oil as well as rice flour. Based on information from an email received from Selfridges sustainability team, it is safe to assume that the palm oil has been replaced by sunflower or rapeseed oil.

The question then is how are the replacement oils any better than palm oil?

Let’s say for a moment that biodiversity in the UK does not matter to Selfridges, that tropical forests and orangutans matter more to their customers. The decision makers at Selfridges should have monitored developments in palm oil producing countries better because removing palm oil from their ingredients is removing protection for forests. How so?

According to fresh reports from the Indonesian website Foresthints, entire orangutan populations are at risk should the EU proceed with a ban on palm oil in biofuels. The decision at Selfridges to remove palm oil from store-brand products is no less damaging to the protection offered by the producers of sustainable palm oil.

In its latest report which was published May 14, 2019, Foresthints warned that:

“…it is no exaggeration to say that the EU is failing to take advantage of the momentum of change in Indonesia, especially in light of President Joko Widodo's order to protect areas with good forest cover in existing palm oil concessions.
Furthermore, the EU is also abandoning its opportunities to collaborate with President Jokowi's administration in no longer issuing new palm oil permits in high carbon stock (HCS) forests.”

The full report includes satellite mapping and lists companies like Bumitama and PT ANJT as custodians of orangutan habitats even though the areas they control have been zoned for industrial use.

The message here is that continued engagement by the EU has a very real and tangible effect on saving orangutans in Indonesia. Rescued orangutans should not be seen as a victim of an industry out of control but rather an industry that is trying to do good. These rescued orangutans could just as easily have been killed in the very same manner that badgers in the UK are being culled to protect local industries. Should the EU proceed with the ban, their influence on saving forests and orangutans will be lost.

Looking at the situation in this light, Selfridges has already thrown orangutans under the bus when the company decided to remove palm oil from store branded products. Here’s hoping that the company will take a harder look at its use of vegetable oils and make a statement for the environment which includes British biodiversity as well.