Native tribes from the Mulu area of Sarawak accuse the Swiss NGO, Bruno Manser Funds, of exploiting some of their fellow villagers for the NGO’s financial gain.

The war of words between villagers that support development and those against have now boiled over into global media.
​
The problems started when the Bruno Manser Fund launched a media campaign against a palm oil plantation in Sarawak and declared that a world heritage site, the Mulu National Park, was being destroyed for palm oil.

The NGO issued a number of press releases on the matter which also accused the state government of land grabs.  The information being spread was enough to garner over 190,000 signatures from foreign netizens on the petition to save Mulu.

Pastor Lian Malang with Mulu community leaders Philip Ube and Ayub Ngang
​This case is a good example of civil society jumping into a campaign without doing due diligence. In building a campaign around the opinions of a few local villagers, the NGO risked irreparable damage to their credibility.

What the Bruno Manser Fund should have done was listen to the wider population that was involved in the area and confirmed exactly which areas were being affected by the plantation.

As it turned out, the majority of villagers in the Mulu area support the development of the plantation. Community leaders from the Mulu area did not mince their words when they held a press conference in March to “deny and explain the truth to all authorities.”

“We are representatives of the villages, taking our own initiative to explain to all parties to clear our name as the residents of the area,” said Penghulu Herbert Lawai.

“BMF is trying to twist and exploit our relatives from Kampung Batu Bungan, Mulu through Penan longhouse chief Ukau Lupung and some others, to object to and block the Radiant Lagoon company in carrying out work on the land, which has been agreed to by Long Terawan and Mulu villagers.

We, the original inhabitants of the Mulu and Long Terawan areas, have been embarrassed by the protest actions of Ukau Lupung’s brother, which are beyond the customs of the villagers and the people on the ground.

We ourselves gave advice to Ukau Lupung and Willie Kajan, and explained the effort and social responsibility of the company after the plantation is open such as giving oil palm seedling, cooperating with the company, taking employees from among villagers and so on.

Here we also want to expose the names of a foreigner, Lucas, and three others involved with BMF so that action is taken against them because they are the ones that interfere with the governance of Long Terawan and Mulu. Today we have come to deny and explain the truth to all the authorities.” 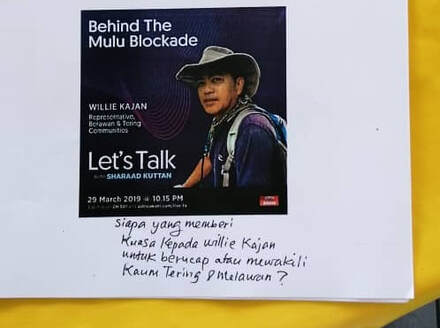 Translation: Who gave Willie Kajan the power to speak or represent the Tering tribe?
The community action was taken a step further by a local church leader, Pastor Lian Malang, who actually filed a complaint to the police and urged the police to take action against the Bruno Manser Fund which he said was “stirring up trouble by instigating the protests against the plantation company.”


On the issue of the “destruction of Mulu National Park,” the Assistant Minister of Urban Development and Natural Resources, Datuk Len Taliff Salleh, confirmed in a State Assembly’s Q&A session that the allocated lands for the plantation did not encroach into Mulu National Park as alleged.

All this information was apparently not important to the Bruno Manser Fund as they published a video on Youtube to continue their campaign.

This made the community leaders so upset that they held a third meeting with the Resident of Miri and followed that up with a separate meeting with the state assemblymen for Mulu area, Datuk Gerawat Gala. Following these meetings, the Mulu Assemblyman stated to local media that the group of villagers that had been flown to Europe at the expense of the Bruno Manser Fund, did not speak for the majority of the villagers.

He added further that:

“The land claimed by the Penans is within the territorial claim of a Long Terawan so the Penans of Batu Bungan are being used by Willie Kajan and BMF to stop RLs plantation activities over land which is not theirs. Ketua Kaum Ukau Lupong is aware of this but unfortunately he persisted with BMF.”

Fearful that the voices of the majority of local villagers would continue to be overwhelmed by the media influence of the Bruno Manser Fund, community leader Pastor Lian Malang decided to issue a press release outside of Malaysia in the hope that foreigners will have a chance to read about what is going on in Mulu.

The facts in this case should be clear enough to speak for themselves. The Bruno Manser Fund, which is acknowledged as a champion for native rights by some in Sarawak, looks like it made a mistake when it tried to deny the majority of natives in Mulu, their right to make decisions on what to do with their lands.

Double Dynasty, the parent company of Radiant Lagoon has meanwhile confirmed that the areas allocated for the palm oil plantation are in fact secondary forests which had been logged over previously, not primary Borneo forests.

Published May 2019. CSPO Watch
May 28.2019. Update to the demands of the Mulu natives in Sarawak. After the publication of our commentary above, the Mulu natives spoke up again to local media. Read the natives statement here.