​Embracing Change Key to Better Livelihoods for Dayaks in Sarawak

​How is it that the Dayaks in Sarawak, one of the biggest indigenous groups in Malaysia, are doing so much better than their counterparts in Indonesia? There are similarities in land claims struggles between villages and corporate plantations but these tend to be far fewer than all the reported land conflicts in the Indonesian side of Borneo. Rita Insol who is a newly appointed state senator provided some insights, key of which is that the Dayaks in Sarawak embraced changed while those in Indonesia appear to have resisted it. 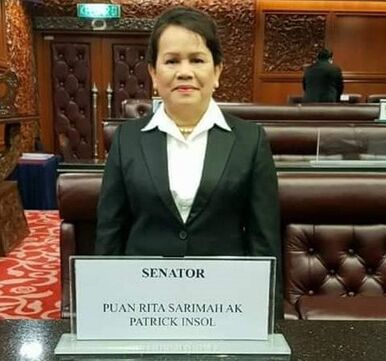 Senator Rita Insol from Sarawak state, Malaysia
In reference to popular media reports on the challenges faced by the Dayaks in Borneo, Senator Rita Insol spoke to us to present some facts on Dayak women in Sarawak and palm oil. The state senator is the Vice President of the Dayak Oil Palm Planters Association and an outspoken champion of Dayaks in Sarawak.

“It was quite upsetting to hear about the problems caused by the oil palm industry in Indonesia, especially how it affects the women. I hope they may find some inspiration from how we as Dayaks in Malaysia look at the palm oil industry because that could be a solution for Dayak women in Indonesia.

The news report made it sound like all Dayak women are negatively impacted even though the report is only based on one village. I must clarify here that the situations reported are certainly not the case in Sarawak.

Palm oil is an important crop to Dayaks in Sarawak, 28,000 families depend on its income to elevate ourselves in society. What concerns me about all these media reports on Dayak conflicts with corporations is that it may affect what we are doing in Sarawak. I don’t want negative stories to affect the sales of our crops especially to the EU which is the only market that has shown a concern for sustainability and human rights especially rights for indigenous peoples.

Sarawak’s Chief Minister, Datuk Patinggi Abang Johari Tun Openg has already pledged to the EU that Sarawak palm oil will be grown and produced sustainably. The Sarawak state government is firmly in support of the MSPO which has helped to guide many of our growers to adopt sustainability practices. Our small farmers are grateful to the Malaysian Palm Oil Board for bearing the costs of certification.

Some of the growers like Double Dynasty of Miri have gone beyond the requirements of certification by investing in a methane capture system at its mill as the Europeans have said it was a point of concern.

There is even an active project to promote the use of organic farming methods so that the industry in Sarawak can further reduce its use of chemicals. We are grateful especially to European countries like the Netherlands which is investing in a program through Solidaridad and IDH to further train our small farmers to increase harvests.

But we cannot keep up the higher costs of sustainable farming without market support. If you look at the lost opportunities when Sarawak’s plantations gave up producing land for conservation under the requirements of the MSPO, there is an economic loss which we hope can be shared with buyers downstream. It is the small farmer especially who needs the European Union to help maintain the sustainability by buying palm oil from Malaysia because Dayak farmers are an important stakeholder in the supply chain for Malaysian palm oil.

However, many of these small farmers cannot make a living from oil palm as the global prices can fall too low for them to make a living. We as Dayak farmers and women in the industry absolutely need the support of better buyers like the European Union to help us achieve our development goals in a sustainable way.

It is therefore important that we make sure the reputation of the palm oil industry in Sarawak is maintained. What we have done here may well indeed be used as a model for our Dayak sisters in Indonesia. You can call its God’s Gift or Green Gold as some others call it but we only see oil palm as wise advice from the United Kingdom who introduced the oil palm to Sarawak. The British government recognized its potential to lift rural farmers from poverty through this crop. Overall, the Dayaks in Sarawak have chosen to embrace this crop as it can generate a higher income than if we were to remain as weavers of baskets and mats.

The signing of the MoU between Port of Rotterdam and Bintulu port to create a biohub bodes well for green growth in Sarawak as well as the import of sustainable goods for Europe. There was a recent statement from the Malaysian Palm Oil Association that Malaysia is losing up 25% of her palm oil yield due to the shortage of workers caused by travel restrictions imposed because of Covid19. That is a federal issue that has to be addressed by Putrajaya. From where we are in Sarawak, I can say with full confidence that if a market like the EU were to support the sustainable production of palm oil by paying a fair price for what we grow, there is much more production available by simply rejuvenating all the farms that the Dayaks in Sarawak have abandoned.

These are the facts that do not get enough media coverage. I intend to use my position as a state senator to ensure that the proper image of palm oil from Sarawak is projected for all to see. As a Dayak woman and an oil palm farmer myself, I intend to lay out all the issues faced by Dayaks in Sarawak so that the state government may address them. There are many issues from our land rights to the support of buyers and foreign governments in Europe that need to be addressed.

With the support of the state government and Chief Minister Datuk Patinggi Abang Johari Tun Openg, the commitment of the Malaysian Sustainable Palm Oil scheme and the pledged support of countries like the Netherlands, I can say with full confidence that the sustainable development of Sarawak can take place with the preservation of our forests and orangutans at the same time.”

We thank Senator Mdm Rita Insol for her open views on development in Borneo and the Dayaks.