Rhinos on the Verge of Extinction in Borneo

​December is the time of year when I stay away from most media so as to avoid the constant barrage of bad news on the natural world. This is after all, the season for cheer and hope that the new year is kind to all. The message I received from Sabah this morning however, demanded that something be said. 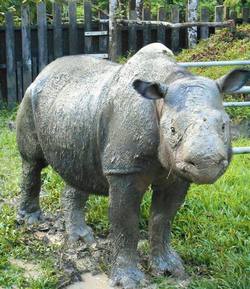 The message was an alert that the second last rhino in Sabah is gravely ill and could be gone in a matter of days. Her name is Iman and when she passes on, there will only be one rhino left in Sabah and very possibly, all of Borneo. I wrote on rhinos back in 2013 and since then, the only blip of positive news which unfortunately went bad very quickly was the capture and eventual death of a rhino in Indonesian Kalimantan. When Iman dies, there will only be one rhino left in Borneo. Tam, at the Borneo Rhino Sanctuary in Sabah.

How could the world’s third largest island not have enough room for rhinos?

A study on Sumatran rhinos, the type found in Borneo, offered some consolation in that these rhinos in Borneo have been extinction bound for 12,000 years. You can read more about the recent study on the genes of the Sumatran rhino and how it has doomed the species since the Ice Age.

Climate pressure, loss of habitat and habitat fragmentation, these are the pressure points that will see the extinction of other big mammals unless the knowledge we have at hand is applied today. We can’t do anything about the loss of land bridges thousands of years ago but what we can do is to ensure viable habitats and protection of endangered species against all threats including poaching. It is hard to imagine that a region like Sabah which boasts of a high percentage of totally protected forests is at the same time a battleground for the survival of species like the banteng or wild buffalo and the last remaining elephants in Borneo.

The Palm Oil Industry in Malaysia Must Engage
I remember with regret that the information I collected at the Orangutan Conservation conference in 2012 was barely used. Ground studies and research by conservation groups and the Sabah Wildlife Department had shown clearly that the palm oil industry in Sabah has to become involved in conservation efforts. In highlighting the failure of protected forests to serve as biodiversity banks, the one sentence that stuck with me through all these years is:

The report that was presented by the Director of the Sabah Wildlife Department at the time, Datuk Laurentius Ambu, had a clear message to the industry in its closing statement, which I post below.

Malaysia’s Sustainable Palm Oil Certification Must Engage!
Armed with the information from the Wildlife Department’s report, I did challenge palm oil industry members who claimed to be “sustainable” to make sure they did not contribute to the problems identified in the report. The most notable problems for wildlife included the loss of travel paths when riparian reserves were either developed or disrupted when large drains break up wildlife corridors. This was tiring work that was for the most part, discouraging. I would see a positive response in that the company was protecting wildlife corridors only to find out that their neighbors on either side did not adhere to sustainability standards.

I wrote this commentary in a Sabah based news platform recently. The hope was that the palm oil industry in Malaysia, in particular the fledgling Malaysian Sustainable Palm Oil(MSPO) folks would pick up on what my expectations of them are. To put it in a nutshell, I expect the MSPO to come through with solutions for conservation where other sustainability schemes have failed. This to me, is a realistic expectation due to one simple fact. As a national scheme, every patch of oilpalm in Malaysia must be certified as sustainable.

As of this writing, the Malaysian sustainable palm oil scheme is only starting to roll out across the country. This is as good a time as any, to remind the folks at the MSPO that the true sustainability of palm oil operations must not focus overly on the protection of high conservation value or high carbon stock forests. Isolated lush green forests won’t mean much if they are devoid of wildlife. If I had to choose only one indicator to mark the sustainability of the MSPO standards, I would definitely choose positive conservation impact. Let the last remaining rhinos be a constant reminder of the need to create a sustainable landscape where no one has to wake up to yet more news of extinctions.​