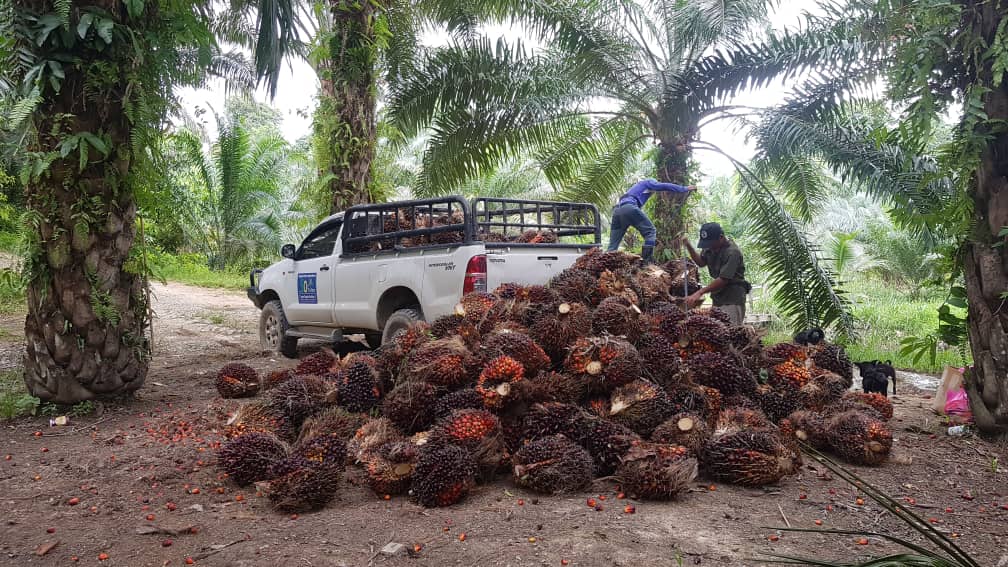 Harvesting palm oil in Sarawak. Photo credit: Ugak Sanggau/ Super Organic Fertilizers
Researchers from Bangor University and the University of Hull issued a new report on palm oil’s effects on biodiversity and warned that a second wave of biodiversity loss happens when oil palm plantations are replanted after their 25 year life span.

Excerpts from the report which was published on The Conversation said that:

“An often overlooked fact is that oil palm plantations actually have higher levels of biodiversity compared to some other crops. More species of forest butterflieswould be lost if a forest were converted to a rubber plantation, than if it were converted to oil palm, for example. One reason for this is that oil palm plantations provide a habitat that is more similar to tropical forest than other forms of agriculture (such as soybean production). The vegetation growing beneath the oil palm canopy (called understory vegetation) also provides food and a habitat for many different species, allowing them to thrive. Lizard abundance typically increases when primary forests are converted to oil palm, for example.

Banning palm oil would likely only displace, not halt this biodiversity loss. Several large brands and retailers are already producing products using sustainably certified palm oil, as consumers reassess the impact of their purchasing. But as it is such an ubiquitous ingredient, if it were outlawed companies would need an alternative to keep producing products which include it, and developing countries would need to find something else to contribute to their economies. Production would shift to the cultivation of other oil crops elsewhere, such as rapeseed, sunflower or soybean, in order to meet global demand. In fact, since oil palm produces the highest yields per hectare – up to nine times more oil than any other vegetable oil crop – it could be argued that cultivating oil palm minimises deforestation.” 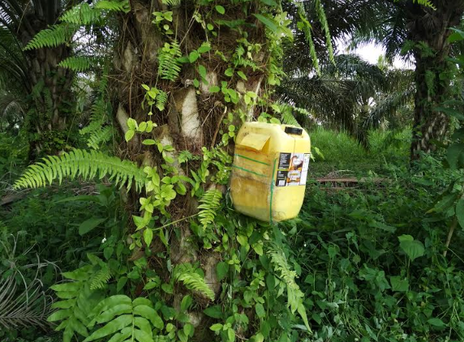 Managing pests organically with pheromones in Ecuador
The main findings from this study supports what the palm oil industry has been saying, that it is the most sustainable vegetable oil for cultivation. That it resembles more of a forest when compared to vegetable oils like soybean or rapeseed.

A visit to any mature palm oil estate will show plenty of wildlife from birds to monkeys and reptiles.

The high level of biodiversity discovered by the study is not news to the industry which has long argued that it must be a preferred vegetable oil to supply the food and fuel needs of the booming human population in years to come.

The study does warn that despite its findings which favor the oil palm, further deforestation of primary forests should not be encouraged and that replanting should be conducted only within established plantation areas. It further warned that 13 million of the estimated 20 million hectares of palm oil planted globally will need replanting between now and the year 2030.

These findings are sure to be of use to companies that are producing certified palm oil as this new concern to maintain biodiversity levels in oil palm producing regions addresses the important issue of maintaining biodiversity levels in palm oil producing regions. This is a dynamic point for the industry to make against other vegetable oils like soy, rapeseed or sunflower that undergo a total destruction of farmlands and biodiversity loss every year. The impacted area for other vegetable oils like soy or sunflower is well over 200 million hectares globally.

A recent report issued by the NRDC indicated that the US  destroys 200 million hectares annually to replant corn and soy, most of which supplies the bioenergy and meat markets. The NRDC report covered a wider range of issues including the sequestration of carbon and its release when farm lands planted with soy or corn are tilled every year. In comparison, the “limited commercial lifespan” of palm oil only calls for a disturbance of the planted environment once every 25 years. The fact that a mature palm oil plantation will stand forest like for another 18 years ( since it takes about 7 years for the oil palm tree to grow to the height of a mature tree) further supports industry arguments that oil palm trees are actively removing carbon from the atmosphere.

There is no doubt that primary forests serve the purpose of being a carbon sink best but in the face of the growing needs of the human population, there is also no doubt that palm oil provides the best solution for food and fuels. Preventing a second biodiversity loss in replanting or maintaining soil health in oil palm estates is actually very doable when compared to other cultivated vegetable oils.
Biodiversity rich farms can already be seen in the palm oil estates of the Colombian company, Daabon, which is one of the biggest producers of organic palm oil. Elsewhere in Ecuador and Malaysia, small farmers have also started growing palm oil organically as market demands grow. Biodiversity levels in the small holder farms are said to be high but no one knows for sure how high. It would require studies like the one conducted by Bangor University and the University of Hull to confirm. This would make for an excellent study as small farmers make up 40% of the global palm oil supply. Their impact cannot be understated.