January 13, 2020. It is with much grief that we read of the passing of Benediktus Tambonop, whom we met as the Bupati of Boven Digoel district, Papua.

His dedication to indigenous Papuans, many of whom lined up in his office to air their grievances, his wisdom in acknowledging that Boven Digoel needed development and his insistence that it be equitable to indigenous peoples, will remain forever with us.

Rest in peace sir. May your visions of an equitable Papua be realized for all Papuans soon.

​CSPO Watch
Papua needs development. Anyone who has visited this remote province of Indonesia will attest to the fact that the level of poverty especially amongst its indigenous peoples is unacceptable in the 21st century. As one of the three semi-autonomous regions of Indonesia, Aceh and Yogyakarta being the other two, it is getting the lion’s share of development funds from the central government which is determined to bring development to this province which has long been side lined in Indonesia’s development.
​
The development plans which includes infrastructure in the Trans Papuan highway is however seeing its share of criticism from foreign environmentalists who attack any licenses for palm oil or timber plantations as well as the highway itself.

Their actions could well be considered a crime against humanity when one considers the dire need to eradicate poverty in the province. Despite the NGOs criticisms and the failure to secure forest conservation funds like the REDD, the province has not been discouraged from pursuing its vision of a green economy.

Its ambitious goal of preserving up to 90% of its forests reflects the socio-economic realities on the ground as it develops. As one of Indonesia’s most remote areas, late development has meant that it remains well forested with a large number of its indigenous population still dependent on the traditional livelihoods of hunting/ gathering which condemns their children to the historical cycle of poverty.

As development comes to Papua province, it is beginning to attract migrants from other provinces in search of work. Their increasing numbers have not gone unnoticed by the local administration or traditional chiefs whose message now is that of equitable development in Papua.

In a recent discussion with an investor in the district of Boven Digoel, Regent Benediktus Tambonop made it clear that Papua needs development but this would be done only on Papuan terms: that development must be sensitive to the environment and equitable to the indigenous peoples.
Surprisingly young for the position he holds, the Regent whose daily activities in office is to listen to the concerns of his people, spoke at length about his visions for the district. Quoting from his conversation:

“We need development. There is no worry about losing all our forests. In Boven Digoel, there is much land, unlike Java. We could develop to benefit all Papuans and still have plenty of forests left. We welcome investors but we have strict conditions for development. The investor must respect the environment and not cause unnecessary harm to it and our indigenous land owners must share the benefits of development and be treated equitably.” 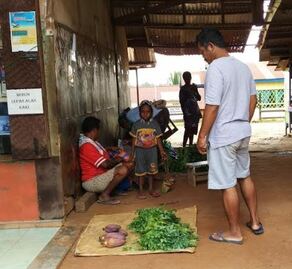 Indigenous Papuan woman peddling her forest products
​Amidst the hustle and bustle of Asiki town, a community created by an oil palm company, the poverty among the indigenous population is quite clear. Indigenous women peddle their meager forest produce to earn a few dollars while accompanied by their children who should have been at school.

Pastor Yakob from the Catholic church admitted that there was much to do. He told stories of his early days as a missionary working with remote communities.

“We were there in the days when the borders of Papua and Papua New Guinea did not exist. We went up to the high ( mountain ) areas and urged the forest peoples to come down from their tree top houses and created villages for them.
When the arguments on the border started, we did not care who was Papua New Guinean or who was Indonesian, we provided shelter and comfort when no one else wanted these people.”

The historical tensions between the two countries have eased in recent years and this has created a unique situation where the flow of indigenous peoples from Papua New Guinea and Papua province continue as they did in the days of old. A stark difference between the two regions is that Papua New Guinea which has seen a lot more loss of natural resources remains just as backwards as Papua which still boasts of having 90% of its forest cover. The credit for this remains undoubtedly with the infusion of funds from the central government of Indonesia but the province cannot continue to be rainforest rich and a beggar for development funds.

Being rainforest rich is turning out to be a curse for Papua. Despite its pledges to save vast areas as forests, every license issued to timber or palm oil has been subjected to criticisms from foreign environmental groups. It is nothing less than hypocritical of these environmental groups to celebrate reforestation elsewhere but not support the avoided deforestation in Papua.

In the case of palm oil, which has the capacity to do so much good for people as evidenced by the palm oil community of Asiki in Boven Digoel, no deforestation policies adopted by multinational traders of palm oil has condemned any palm oil from Papua as being “unsustainable” simply because of forest clearing. An example of this would be the multiple reports written on the fact that the Wilmar Group could be buying palm oil or even sugar from Papua.

Missing from these reports on the forests in Papua is the fact that there are people who depend on these forests for development. The myth that the Papuans are content to live their traditional jungle lifestyles is exactly that. A myth. According to the Clan Chief of Lembaga Masyarakat Asli, Frederikus Mahusay, deforestation is “justified and needed as long as it benefits the local peoples.”

The emphasis for equitable development can be seen in the indigenous families that shuffle along the Trans-Papuan highway. They all stop at the sound of coming vehicles and turn their heads as the vehicles pass. Faces expressionless, the feeling is almost as if the world is passing them by. Indeed it has been.

Jurisdictional Certification under a Sustainable Papua scheme
​
Balancing the needs of Papuans to the wants of foreign buyers should not be a contentious matter. The popular Papuan sentiment against the “intervention of foreign environmentalists” maybe “berdiri sendiri” which literally means to stand independent of outsider influence but the Regent of Boven Digoel acknowledged a problem associated with this position of local pride. 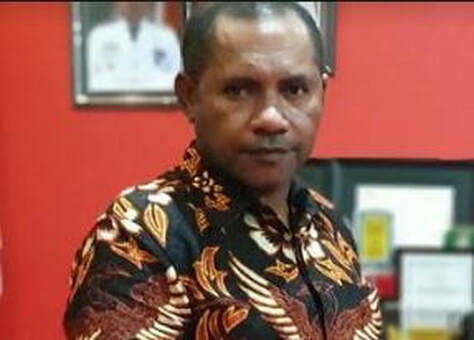 Bupati Benediktus Tambonop, Regent of Boven Digoel district in Papua, Indonesia
​Balancing the needs of Papuans to the wants of foreign buyers should not be a contentious matter. The popular Papuan sentiment against the “intervention of foreign environmentalists” maybe “berdiri sendiri” which literally means to stand independent of outsider influence but the Regent of Boven Digoel acknowledged a problem associated with this position of local pride.

“We can be proud and determine our own destinies by developing industries as we like. But what happens if there are no buyers for what we produce? We would like to see more downstream industries in Papua so that we are not so dependent on the export of raw materials to other provinces but we are so far away from the market.”

If Papua is to attract the caliber of investors that it wants, like Wilmar Group, it has to come up with a way for its investors to rationalize the unavoidable deforestation in its development.

The best way forward is to spell out clearly in simple words that environmentalists can fathom, that its zoned development areas of 1.5 million hectares is a mere 6% of its total land mass. As it works on its spatial plan for the 2019-2024 period, what the province needs to do now is to take a hard look at its protected forests and development zones and create a spatial plan that would support the labelling of its development plans as sustainable. This is something that needs to happen in order to protect investors from criticism by environmental groups.

It would be an incredible claim indeed as no other jurisdiction in the world can lay claim to saving 90% of its forest cover as part of its development plan. This may not be enough for environmental groups but the goal is one that should gain the support of investors with an interest in sustainable development. As Regent Benediktus Tambonop puts it,

“We are rich in rainforests but we are poor.”

Leaving no one behind

The zoning of its coastal districts including Merauke and Boven Digoel in the south and Nabire in the north is a sound economical decision which makes use of sea transport to export its goods. It is no coincidence that life spans have increased while poverty rates have fallen in this these. However, creating special production zones to facilitate the protection of vast forest areas means the exclusion of communities who live in these forests. Their children should have equal rights to education and healthcare.

This is where the concept of biodiversity offsets could be used well to bring development funds to these forest peoples. Quite simply, any licenses issued to industries should quantify a percentage of company revenue towards the protection of forest areas and development for indigenous peoples. This could be based on the 1% for the Planet model which is one of the better corporate social contributions globally. While other jurisdictions that make use of biodiversity offsets can only claim to “cut one tree but protect another,” investors in Papua can claim to “cut one tree and protect ten others” while ensuring that no one is left behind in poverty. This would be sustainable development that no other region in the world can match.