Papua. The word itself is enough to conjure up images of native peoples wearing only what nature provides while living in impossible tree top huts set in the background of dense tropical jungles. Divers would know Papua from the world famous dive sites around Raja Ampat islands.
As one of the least developed regions in Indonesia, the provinces of Papua and West Papua in Indonesia are described in romantically exotic words as this webpage did in its write up of Papua Burning Paradise.

“ ( Papua is a) magical, strange and largely undisturbed galaxy of bowerbirds, cassowaries, cuscus and tree kangaroos” 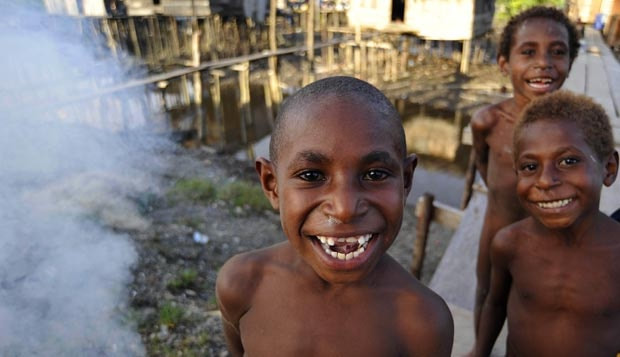 Image:Tempo. Papua has most child laborers
Other writers who may or may not have visited Papua personally expanded on those words and gushed:

“Tree kangaroos that look like big teddy bears; wallabies, pademelons, cuscus, ringtails and sugar gliders; bandicoots and echidnas; dozens of bat and rodent species - about 80 percent of Papua's 357 known mammals are found nowhere else.
And birds, oh so many charming birds: a whole gamut of bird-of-paradise species, one more flamboyantly beautiful than the next; bellbirds, palm cockatoos and hornbills; hawk owls, kookaburras and flame bowerbirds; king parrots, golden mynas and spotted jewel babblers - the list of lovely avians flying the jungles of Papua is hundreds long.”

The writer from Deutsche Welle is excused if these images were strictly created from his imagination. Most of the information on Indonesian Papua comes from either tourist brochures or critics of its development programs which includes the usual timber, palm oil and mining industries. This is a travesty that must be addressed as neither tourism nor foreign environmental groups can facilitate the level of aid that the average Papuan needs.

The United Nations Development Programme (UNDP) presents the reality in Papua as:

"Poverty (MDG 1) is a challenge in Indonesia despite impressive economic growth in recent decades. According to the Central Statistics Agency, almost 30 million people, or 12.36 percent, in Indonesia live below the national poverty line. Certain regions of Indonesia are also poorer than others; with poverty rates in regions like Papua, and West Papua more than double that of the national average."

Despite the fact that the statistics on the poverty level of Papuans is readily available, green groups continue to present an image that all the Papuans want to do, is to live happily in their tree houses. Critics like Mighty Earth from Washington or Aidenvenironment from the Netherlands consistently fail to mention that the average lifespan of the Papuan is increasing as local economies grow.

As the economy strengthens in Papua and West Papua, these environmental groups are highlighting the development as if the last bit of forests were falling under the chains saw. Using fantastic titles that portray Papua as a paradise, there is no shortage of complaints against palm oil companies that are developing the two provinces.  A sampling of current charges include:

PT Austindo Nusantara Jaya, with a license for 34,147 hectares
http://www.greenomics.org/docs/ANJ-clearance-Papua-forest_(LowRes).pdf

Korindo Group with licenses for over 100,000 hectares
http://www.mightyearth.org/korindo-group-still-destroying-pristine-rainforest-in-papua/

The most sensationalized news however was that of “The Secret Deal to Destroy Paradise.”  The report wrote of
Spanning 2,800 square kilometers (1,100 square miles), nearly five times the size of Chicago, the land sits at the heart of one of the world’s last great tracts of unbroken rainforest, on the giant island of New Guinea.

Other spin offs of the report went on to expose the ugly side of the colonial approach to fighting climate change when Mongabay described the project as a “carbon bomb that…. will produce as much greenhouse gas emissions as Virginia does by burning fossil fuels in a single year.

This attitude is colonialism in its ugliest form when you consider that Virginia is exploding “carbon bombs” yearly when the Tanah Merah proposal is only exploding it once in its lifetime.

It should be clarified here that the “giant island of New Guinea” is divided into the Indonesia side of Papua and West Papua but the other half belongs to the Oceanian country of Papua New Guinea which is struggling with its own attempts at development and self guidance.

Back to Indonesian Papua and West Papua, it is obvious that programs that seek to certify industrial operations as “sustainable” will not work as long deforestation is considered unacceptable. These Indonesian provinces have nothing else to offer if not their natural resources. As the least developed provinces with a special entitlement of being autonomous, Papua and West Papua provinces with their unique cultures and characteristics have a chance of becoming Indonesia’s best models for sustainable development albeit without certification.

The extrajudicial powers that they enjoy has been seen in the rejection of an expansion of the Freeport mine by the Governor of Papua, Lukas Enembe, who rejected it based on the customary rights of Papuans for self determination.

The judicial influence of the Papuans backed with the financial support of Jakarta create a unique opportunity for Papua and West Papua to create models of sustainable development that may not be replicable elsewhere.  The stoppage of the Transmigration Programme means that these two provinces will have the lowest population densities in Indonesia. This is important as both Papua and West Papua have pledged to sustainable development.

The commitments to a conservation based economy with an average of 75% as undisturbed land habitat between the two provinces are however becoming questionable. According to the development plans of 2013-2018, the government's commitment to protect Papua province’s forests as lungs of the world is not working out as the foreign funding for conservation based development has not materialized.

This is clearly a huge disappointment for the government. If the foreign funding for development was there, it could have meant that the much alarmed Tanah Merah project of 2800 km2 could have been repeated many times over and still not affect the pledge to protect forests. With a combined land mass total of 459,411 km2 which equals to over 45 million hectares, the approximate half a million hectares in the concessions named above look like a speck in its landscape.

There may never be a certified palm oil or timber plantation in Papua or West Papua but certification is a moot point for Papua and West Papua at this point in time. Despite the failure of those who demand that the forests be saved to provide development funding, the provincial governments are still targeting upwards of 50% of their jurisdiction to be saved from development. This is being done not for the benefit of the world but for the benefits of its local peoples. As such, this is much bigger than simple certified plantations because this is sustainable development.