A war of words over the forests of Papua is boiling over with foreign groups on one side pitched against the governments of Merauke and Boven Digoel districts in Indonesia’s poorest province, Papua.

There is no shortage of news on the “destruction” of Papua’s forests as foreign groups call it or “development” as the local governments call it.

A sampling of news from foreign groups:

A sampling of news from local governments:

For outsiders, the last remaining pristine rainforests of Indonesia is being promoted as a trip back to primordial times where one can “sleep in treehouses with cannibals.”

A realistic look at life in Papua will however, not show happy forest dwellers in tree top houses eating their neighbors but a region mired in poverty. This report on Papua by Time magazine “A tragic forgotten place: Poverty and death in Indonesia’s Land of Gold” shines some light on a region rich in natural resources that is being challenged by foreign groups as it monetizes those resources to fund development.

The Regent of Merauke has said that only 6% of the land area has been zoned for development and that all palm oil operations will be kept inside this area. This interactive map on Papua from Mapforenvironment show a cluster of plantations concentrated in the south with a few in the outlying areas. 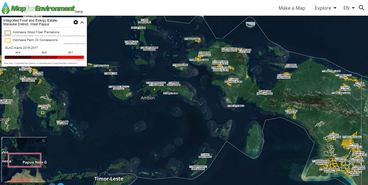 ​Considering how much greenery is left, why is deforestation for palm oil and timber in Papua such a concern?

This is due to corporate commitments to No Deforestation, Peat, Exploitation (NDPE)  which have said that deforestation would not be accepted in the supply of their raw materials. If a definition of “elitist demands of rich north on poor south” was ever needed, the struggle for development and corporate NDPE commitments in Papua will qualify as a good example.

The NDPE commitments need to be challenged on the corporate definition of “sustainability” and those who certify sustainable operations.


On a global scale, the same demands from developed countries being made on African countries are not being accepted by the African countries unless financing to save the forests are there. As for the debate on forests and development goes, this particular finding from The Forests Dialogue held in Gabon, October 2017 is noteworthy.

"Many stakeholders in Central African countries perceive the “no deforestation” notion as something that is imposed from afar, and that is fundamentally a negative prohibition rather than a positive aspiration."

The Ugandan Minister for Agriculture Animal Industry and Fisheries Vincent Bamulamgaki Ssempijja has actually asked both international and local conservationists to stop criticizing his government for promoting  the vegetable oil project especially in the districts of  Kalangala and Buvuma where  oil palm tree projects is being implemented. While this particular case does not indicate whether forests were cleared for the palm oil plantations, its direct impact on “reducing pressure on the country’s natural resources such as fish and forest which were heavily being depleted before the project was introduced” must be noted.

The corporate prohibition of deforestation should not be misunderstood as an effective measure towards preserving pristine forests globally. If anything, it is merely an act of washing one’s hands off the responsibilities of saving rainforests as global research has shown that illegal activities have a much larger and uncontrollable impact on forests. Managed landscapes like that of Olam’s Living Landscapes Policy will achieve more than NDPE commitments but certification bodies like the RSPO are fearful of being associated with certifying deforestation.

We will be reaching out to relevant stakeholders on the Papua issue for their opinions on the issues and will update as responses are received.
​
Update April 26, 2018 from Mr Edi Suhardi, Sustainability Director at PT Agro Harapan Lestari
"​Developing Papua sustainably needs meaningful discourse, not attacks on investors
Palm oil is an effective development agent for poverty alleviation, employment opportunity, improvement of quality of life and access to primary health and education services. Papua as the most deprived region in Indonesia, needs the development opportunity which the palm oil can offer. The availability of land, favorable weather and good biophysical characteristics hold great potential for the industry to ease off Papua’s reliance on federal funding for development." Read the whole response here.

Update April 30, 2018 from Roundtable on Sustainable Palm Oil (RSPO)
"RSPO has recognised that this is a challenge and has commissioned studies for input to the development of the ‘No Deforestation’ element of RSPO P&C Criterion 7.3. In the meantime, however, the strategy of a jurisdictional approach to certification is being developed." Read the whole response here.