Europeans can breathe easier in 2018 thanks to the increased use of palm oil biofuels in 2017. Reports from Statistics Netherlands (CBS) indicate a healthy rebound of palm oil imports to Netherlands which is the biggest importer of palm oil in the EU. The good news for Europeans is that approximately a third of palm oil imports into the EU is used for biofuels. This volume is projected to increase in the coming years as the demand and supply for biofuels corrects itself after the WTO ruled against the EU’s anti dumping measures on Indonesian biodiesel.
​
The transport sector has been identified as a major contributor to the smog that threatens the lives of millions of Europeans. Despite the best efforts of automakers to create less polluting diesel engines,  these efforts have failed according to a 2018 report from the International Council on Clean Transportation (ICCT) This has led multiple European cities to consider car-free cities as an initiative towards cleaner air. 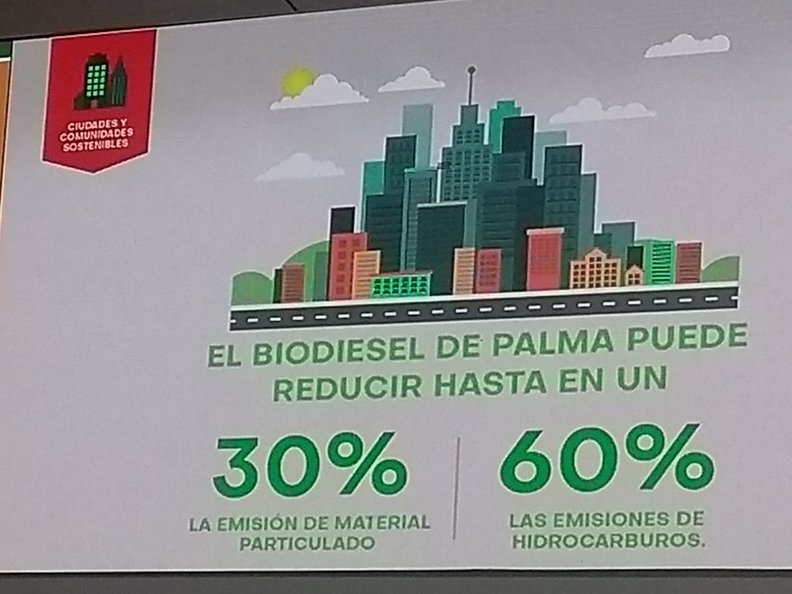 In what should be welcome news to automakers and drivers in Europe, Fedepalma, the association for Colombia’s palm oil industry shared a report this week that quantified how much cleaner palm oil biodiesel is. Announced at the Palm Oil Congress 2018 which was held in Cali, Colombia, the President of Fedepalma, Luis Francisco Dangond was quoted as saying:

Their findings showed that palm oil biodiesel can reduce particulate emissions by up to 30% with a whopping reduction of hydrocarbons by up to 60 percent! Their findings are supported by a report from Ecofys in 2017 titled “(How to solve) Indirect Land Use Change from biofuels) which stated:

§  Biofuels are not automatically good or bad
§  The potential for sustainable biofuels can be very large
§  This requires improvements in agricultural practice and system
§  In long run, bioenergy and -materials have low greenhouse gas emissions
§  ILUC pays back: much smaller or even zero after 20 years
§  Fossil fuels never pay back – instead, emissions increase
§  Deforestation & peatland drainage will not stop in absence of biofuels”

Now that we know biofuels have a large potential as a clean source of energy that can clean the air over Europe, the only question that remains is why are the EU MEPs so afraid of an energy source that removes a threat to the health of Europeans while allowing others to drive and live as they are doing now?

The main arguments against the use of biofuels has been that if biofuels are eliminated as an energy source, the following would take place:


How does a vital solution to fighting climate change fall into such disfavor?

It has to do with the vague science of Indirect Land Use Change (ILUC) which saw the greenhouse gas savings of biofuels spike to a point where they were seen as worse than fossil fuels. This impossible calculation has been attempted by two estimates on ILUC, Globiom and Mirage, which came up with widely disparate numbers.

The anti palm oil lobby was quick to pounce on the worst number from the 2015 Globiom estimate that palm oil was three times worse than fossil fuels. Groups including Transport and Environment continue to find childish glee in pounding this estimate with headlines like “Up in Smoke: Europe’s cars driving deforestation in Southeast Asia.”

It is obvious T&E did not receive an update copy of Ecofys findings in 2017 or maybe they didn’t like being told that their interpretation is incorrect. It is understandable if they chose to ignore Professor Klepper's opinions but it is unacceptable for T&E as an expert on transport emissions to ignore an update of Ecofys findings.

The key statement from the Ecofys presentation in 2017 shoots down T&E’s claim that palm oil is three times worse than fossil fuels by saying that ILUC would almost disappear if there was no peat drainage in Indonesia and Malaysia.

“ILUC is very much a local problem. With less deforestation globally ( assume carbon price of only USD 50/tCO2) and with no peat drainage in Indonesia, Malaysia, ILUC would almost disappear…”

The notion that palm oil biodiesel could have a negligible ILUC that could be erased further with a twenty year pay back as the plantations continue to absorb pollutants must have terrified T&E into a permanent state of denial. They can choose to continue the fear mongering on palm oil biofuels with outdated data but the truth is that the capacity from Malaysia and Colombia to supply a deforestation free palm oil, grown on converted agricultural lands, is readily available.

Hurting the many over the falsehoods of a few

Will science and knowledge triumph over falsehoods? In 2018, we have seen the NGOs alarm about palm oil putting European farmers out of business as yet another falsehood when the French refinery La Mede limited its use of palm oil feedstock to only fill in what European farmers cannot supply.

When biofuels has so much potential to protect the health of Europeans by greening up its transport sector, it is unfortunate to see a small group of people influencing a decision that could hurt so many. Producer countries including Thailand, Colombia, Malaysia and Indonesia have shown that palm oil is a necessary replacement for fossil fuels. Decision makers in Europe will hopefully acknowledge the capacity of palm oil based biofuels to clear the skies above their cities.