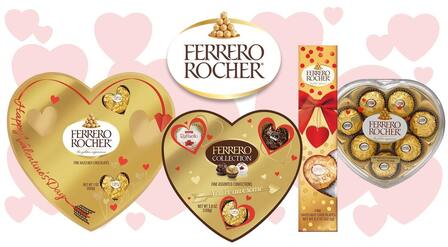 Ferrero Valentine's Day
​This Valentine’s Day 2021 in the midst of a pandemic that has taken so many of our loved ones, spread the love beyond the person whose affection you desire and share it with those who produce the symbol of our affection: chocolates.

The Covid10 pandemic-induced slowdown in global chocolate demand has led to a pile-up of about 100,000 tonnes of cocoa beans in Ivory Coast's interior, as farmers struggle to get by with lower-than-promised prices.

The unwanted stockpile adds to a growing store of beans at ports in the world's top cocoa grower after chocolate makers and buyers in Europe and the United States asked that deliveries scheduled for October-December be postponed to January-March, the exporters said.

As Valentine’s Day 2021 approaches, the demand for chocolates to celebrate our affection for that special someone is something that the cocoa farmers in Africa hopes, will happen as “chocolate demand remained strong throughout the pandemic as the world's most popular comfort food was one of the pleasures continued to enjoy from their own homes.

"The farmers who grow precious cocoa, however, saw little benefit."

Cocoa is the essential ingredient of chocolate and has no substitute. More than 70 per cent of the world's supply of cocoa comes from West Africa, according to Netherlands-based industry monitor Cocoa Barometer.

Of this, half comes from just two countries – Ghana and Ivory Coast. Other regional countries such as Nigeria and Cameroon are also expanding production, keen to grab a slice of the market that supplies the $130 billion chocolate industry.”

As the cocoa industry struggles, it has been beset with rising child labour problems despite the promises of companies including Mars, Hershey and Nestle to reduce the worst forms of child labour in Ghana and Ivory Coast's cocoa sectors.

Major news platforms have rung the alarm bells on child labor in chocolates. The Washington Post report on Cocoa’s child laborer showed that Mars, Nestlé and Hershey pledged nearly two decades ago to stop using cocoa harvested by children. Yet much of the chocolate you buy still starts with child labor.

Bloomberg called it a $100 billion industry that is plagued with child labor.

Deustche Welle covered the problems in depth with the report “Cocoa farming, cheap chocolate and child labor” where it revealed that two decades of promises by the big brands have lead to little improvement for cocoa farmers

"The road to hell is paved with good intentions," according to a famous proverb. And there is indeed no lack of good intentions to eradicate child labor in cocoa farming.

But despite decades of promises, success is still a long way off, as a new study by the NORC research institute at the University of Chicago shows.

Around 1.6 million children in the two largest cocoa-growing countries, Ivory Coast and Ghana, work in cocoa farming, the study reports. Together the two nations produce around two-thirds of the world's cocoa beans.

On every second cocoa farm there, children as young as five have to pitch in instead of going to school because their parents are too poor to hire farm hands. Children are even used for more dangerous work, such as weeding or harvesting with machetes.”

The DW cost analysis shows that farmers get a pitiful 7 cents per Euro compared to the manufacturers who make 35 cents. Keep in mind that the 7 cents for the farmers has to include wages for labor, this explains why children are so popularly targeted as a source of cheap or free labor for the chocolate industry. How much will you pay for a box of chocolates to show your affection for that special someone?

The 7 cents paid to cocoa farmers in Africa appeared to be too much as Hershey and Mars were  accused of trying to undermine cocoa farmers’ pay.

“A fight between the world’s top cocoa producers and America’s largest chocolate makers is getting worse. Ivory Coast and Ghana, which account for about 70% of the world’s supply, accused Hershey Co., the maker of Kisses and Reese’s peanut butter cups, of squeezing the futures market in an effort to avoid paying a premium aimed at boosting farmers’ incomes, according to letters and a statement by cocoa regulators seen by Bloomberg. The countries also said Mars Inc. had changed its buying patterns for the same reason.”

The media exposure of Hershey’s attempts to squeeze more profits at the expense of cocoa farmers made it as far as the Philippines where media reported that the chocolate war between African farmers and Hershey left the farmers holding onto cocoa beans.

The Bangkok Post from Thailand carried a report that Hershey finally succumbed to the negative public relations and agreed to pay the Living Income Differential to Ivory Coast.

What is the Living Income Differential or LID? According to the good folks at UncommonCacao:

“In the case of cocoa growing regions in Ghana, a “Living Income Benchmark” as of March 2020 was $312 per household (this includes 2 adults and 3 children) per month. This comes out to roughly $2.05 per person per day.”

$2.05 per person per day for a farmer’s family of 5 in Ghana to afford a decent living. You could not buy a simple chocolate bar, never mind the fancy Valentine’s Day boxed chocolates, from Hershey or Mars for that pittance.

Share Your Love for Nature
On this Valentine’s Day 2021, share the love beyond the ones you love to nature herself. Fairtrade International, the premier certification body for cocoa warned of the threat to the natural environment if farmers are not paid fairly.

“If smallholder farmers dedicated to producing valuable crops like coffee or cocoa cannot afford a decent standard of living from their earnings, global food supply chains will never be sustainable, rural communities won’t prosper and the natural environment will suffer the consequences.”

The deforestation associated with cocoa has a huge negative impact on tropical forests. Foodnavigator reported that between 2012 and 2016, 14.1 million hectares of forests was lost in the top 30 cocoa producing countries worldwide.

Valentine’s Day in this pandemic year of 2021 is difficult enough to celebrate. Here’s hoping that you get to be in the company of those you chose to be your Valentine. Palm oil free chocolates will hide behind the fact that cocoa is causing so much suffering and deforestation. Don't let their pain show up in the chocolates you give as a show of love.

Look for products like Ferrero’s Valentine Day chocolates where all ingredients including cocoa, sugar and palm oil are certified.