​No deforestation policies do not save forests 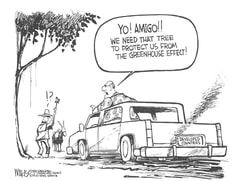 It is a harsh, even an inhumane fact, that the no deforestation commitments being blared out on corporate websites punishes those whose societies developed later than ours.

Wildly popular for CSR policy makers as green window dressing, the no deforestation policies which form the more comprehensive No Deforestation, Peat, Exploitation (NDPE) have been adopted by so many multinational corporations that one would think the remaining forests of the world are safe. This is mere paper policy which aims to deflect criticism but does little to protect forests. At worst, it’s a punitive measure on societies whose only goods available for exchange for development is their natural resources. So why are these NDPE commitments so popular?

The demand to save forests and biodiversity comes from short sighted environmental groups who only see the trees for the greater good but will not provide solutions for those who own the trees. These groups have predominantly been from developed societies whose livelihoods depend indirectly on the forests but only as a means of raising more funds for their operations while glamorising how impoverished indigenous peoples “live in harmony” with their forests. The few communities featured on their websites form a very small minority of the "indigenous peoples" worldwide but are shown as if they represent all indigenous peoples globally.

If having forests and carbon sinks are really that important to “saving the planet,” environmental groups in developed countries would do better to protect and restore the carbon sinks in their own countries. It’s a simple fact that one’s own forests or carbon sinks will clean the air overhead of carbons emissions much quicker than waiting for a forest thousands of miles away to interact with the emissions we spew.

Yet marketing savvy and media massaging has made it look like we really must save forests in tropical countries if we are to save the planet. It is true that the broad leaved forests in tropical countries are more efficient in removing carbon emissions that threaten this climate with change but a far more effective way of reducing carbon emissions is to not emit it in the first place. Penny measures like tackling “transport as the biggest climate problem” may sound like some hero is coming to save all of us but the reality is that transport emissions is an inconsequential contributor if we do not tackle the big ones in energy creation. What’s the use of an electric car that gets recharged with fossil fuels?

If we are to believe what popular media tells us, then a possible solution might be in the popular “Half Earth” proposal by E.O.Wilson.  All we would have to do is to move the growing populations of tropical countries in Southeast Asia, Africa and South America to Europe and leave behind a handful of indigenous peoples to live in harmony with nature as they have for millennia.

If this is an outrageous proposal, then so is the constant demands from environmental groups on tropical countries to save their forests. If “their forests” are to be considered as “our forests” then we have an obligation to work with them as a global village and find the best solutions that benefit all of us.