​Can the MSPO Enforce Ministerial Policies on Peat and Deforestation?

Local media reports including one from The Rakyat Post summed up the new policies as:
1.    Capping of the total oil palm cultivated area to 6.5 million hectares
2.    Stopping planting of oil palm in peatland areas
3.    Strengthening regulations concerning existing oil palm cultivation on peatland
4.    Banning conversion of forest reserve areas for oil palm cultivation
5.    Pledged to make oil palm plantation maps available for public access
​
These are very aggressive policies which would raise the standards of the MSPO to a level above other palm oil certification schemes IF the MSPO can enforce them. 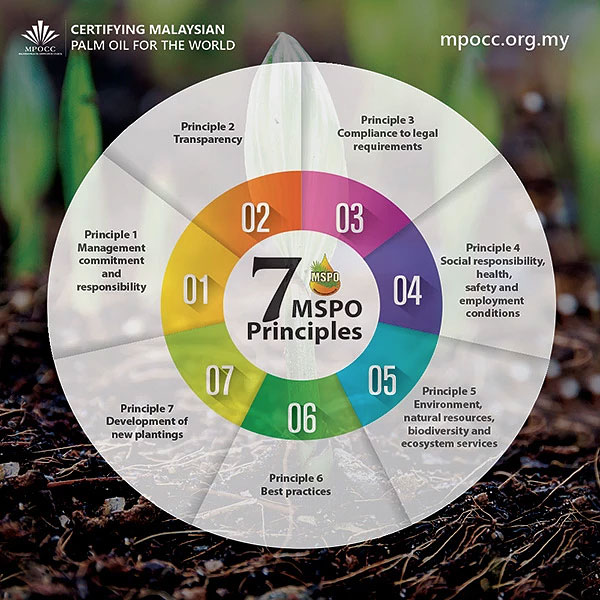 Malaysian sustainable palm oil principles
To understand how the MSPO could surpass other standards for palm oil certification if the Ministerial statements are adopted into its standards, we have to look at the basic reasons for existence and what drives the schemes.

The main difference between other palm oil certification schemes and the emerging MSPO is that the MSPO covers all of Malaysia’s palm oil production. Policies and standards and even the Principles and Criteria that define standards on sustainability are easy enough to put on paper but if it will only apply to selected areas, the strength of those certification standards are greatly reduced.

Consumer concerns in the past three decades on deforestation and human rights abuses have led to a proliferation of certification bodies that try to define sustainability in basic commodities from timber to cotton to food. Most of these certification schemes remain on the fringe as uncertified consumer products continue to dominate consumer products.

What is driving the Malaysian government to try and produce a better brand of palm oil despite the lack of interest in certification, is the fact that the industry is a fundamental part of its economy. If the option was there to replace its palm oil export revenue with say, cleaner industries like technology, the focus might be reduced but with a large segment of its population making a livelihood as farmers, the sensible choice for now is to support the agricultural sector until a time when it can be replaced by an industrial sector.

For the present generation of its citizens involved in the agricultural sector, the Malaysian government  knows well,  that it cannot compete on price with its main competitor Indonesia, which can produce the labor intensive crop much cheaper. It is therefore their hope, that by offering a better quality in terms of sustainability, that Malaysian palm oil will find markets that are willing to pay a higher price for palm oil that is 100% certified.

But can the MSPO deliver?

The MSPO may have the backing of the Malaysian government but adding the new policies to its standards may be challenged on the ground. The recent warnings of fines and penalties for uncertified palm oil farms may go unheeded by small farmers who are struggling to keep their farms in a price depressed market. This threat of penalties or losing one’s license to sell palm oil is unprecedented in the global vegetable oils industry but this extreme measure is needed if Malaysian palm oil is to show beyond a doubt that it is sustainable.

Resistance to a no-deforestation no-peat policy may yet be challenged on the ground. Key states to watch will be Kelantan which is less developed than other Malaysian states. Another state to watch will be Sarawak, where most of the suitable lands for agriculture sits on peat.

Kelantan with its high level of poverty obviously needs to create more industries but in doing so, has attracted criticism for degazetting forest reserves. A solution to prevent forest loss due to degazettement has been tabled by the Malaysian Minister for Water, Land and Natural Resources, Dr. Xavier Jayakumar, which said that all degazettements of forest reserves must have a biodiversity offset in order to maintain Malaysia’s forest canopy.

In the case of Sarawak and its peat lands, a suggestion has been made for Sarawak to file its future plans for oil palm expansion in the state with the MSPO even though the state has the legal right to decide land use. The state government and industry has publicly thrown their support behind the MSPO previously but a new policy on peat may affect that. However, the commitment of the Sarawak government to only expand palm oil plantings as needed on NCR lands ( which means previously farmed lands) should ease any potential conflicts with the implementation of a No Peat policy at the MSPO.

Sabah state, as one of the Malaysian states with the biggest planted areas for palm oil had pledged in 2018 that any palm oil expansions will not be allowed into forest reserves so no challenges are expected there.

These state level commitments in Sabah and Sarawak may stop the expansion of Malaysian palm oil into forested areas but will that be enough to stop the popular alarmist calls of orangutan extinction?

Sabah and Sarawak are the only two Malaysian states with orangutan populations. As such, if the mission of the MSPO is to achieve global acceptance of its certification, it would do well to use its influence to create wildlife corridors to ensure the long term existence of orangutans in Malaysia. This can be achieved simply with the enforcement of its HCV standards, a conservation force that was absent before the MSPO became mandatory for Malaysia. Conservation initiatives by the governments of Sabah and Sarawak to save endemic wildlife is already being boosted with the enforcement of the MSPO standards on HCV areas. This alone may not be enough to create the green corridors for wildlife as palm oil is only one of several agricultural products but it is a good start.

The Human Factor in Malaysian Sustainable Palm Oil
Part 1. The rights of indigenous peoples
Saving the orangutans is the lesser challenge faced by the MSPO. Field reports from the MPOCC which oversees the MSPO certification shows that Malaysian companies have been proactive in saving not only orangutans but also the last remaining elephants in Borneo. These early initiatives in conservation were driven not by certification requirements but by the companies recognition of the need to co-exist with wildlife. What may prove to be more challenging to the MSPO is the land rights of indigenous peoples in Malaysia.

Malaysia has created a problem of indigenous rights for itself with its on-going effort to include its indigenous peoples in development. An easier solution might have been to follow that of developed countries where indigenous tribes are allocated land to live on, as seen in the Indian Reserves of north America or aboriginal reserves in Australia.

In respecting the rights of Malaysia’s indigenous peoples the government has not gone to that extreme. In protecting its indigenous peoples, the Federal government even took the unusual step of suing the Kelantan government. The case is still on going. The respect for indigenous rights was reinforced this month when Malaysian Prime Minister, Tun Dr Mohamed Mahathir, made an all inclusive statement in launching the Shared Prosperity Vision 2030.

The Federal pledge to protect the NCR lands supports state level action on indigenous land issues. Sarawak state in particular, has a high number of legal actions of indigenous peoples versus government and industrial plantations. To resolve the conflicts, the state legislature introduced a bill in 2018 to acknowledge native land rights under Native Territorial Domain which came into force recently. Any confusion over the new legislation on indigenous land rights was cleared up by recently by Deputy Chief Minister, Datuk Douglas Uggah, who clarified that the NTD is over and above NCR lands.

The indigenous peoples of Sarawak have come a long way since the early days of independence as a colony of Great Britain. From loin cloth clad men and topless women seen in photos from the 1960’s, the indigenous Dayaks of Sarawak are a prime model of an inclusive society where none are left behind in poverty or left illierate. The Malaysian policy of inclusion is a stark comparison to that of developing south American countries where indigenous peoples are excluded or worse, persecuted as this new report from Survival International warns of genocide against native south Americans.

How the new law affects indigenous land rights in Sarawak remains to be seen as the legislation is new but the MSPO standards has recognized farm areas that belong to local communities as long as these areas have not encroached into forest reserves or protected areas. This maybe an over reach on the part of the MSPO but up to this point, the states have not protested this third party recognition of indigenous land rights.

Part 2. Labor rights in Malaysian palm oil
On an equally contentious front to the sustainability of Malaysian palm oil are the allegations of labour abuse in plantations. Recent cases against FGV and Nestle’s supply in Sabah are prime examples. In FGV’s case, the management has changed its hiring policies to prevent reoccurrences of labor abuse and invited stakeholders to see the new management system in place.
On the allegations of child labor in Sabah, response from the Sabah government to CSPO Watch has been that the allegations of rampant child and labour abuse in plantations is “fake news” in the sense that a few allegations of state law violations do not represent the industry as a whole. More information on labor laws in Malaysia pertaining to child labor, housing and amenities can be accessed on the Ministry of Human Resources website.

While the problems with labor abuse in Peninsular Malaysia, as evidenced by the problems at FGV are usually caused by unscrupulous migrant worker agencies, Sabah faces a different problem in its proximity to impoverished people from the Philippines and Indonesia and how they see Sabah as a land of milk and honey. The unstoppable influx of illegal migrants will continue to challenge the tenacity of its labor laws. The implementation of the MSPO standards across Malaysia is therefore seen as a much needed force to enforce the laws.

These are the real challenges faced by the MSPO. As an ambitious national program to prove that it is sustainable, it will have to take on the extraordinary burden of showing that it can be a force to bring about positive change across the whole of Malaysia.
Political and corporate interference is to be expected but with the MSPO’s goal to achieve global acceptance of its certification, it will have to achieve what no other certification body has been able to do for palm oil. This feat will be most important for Malaysian palm oil to keep or even grow its export volume to premium markets in the EU. The current hot topic on palm oil and the EU maybe on restrictions for biofuels but it would not be entirely surprising if those restrictions were removed in favor of a wider rule to remove deforestation from all EU imports.