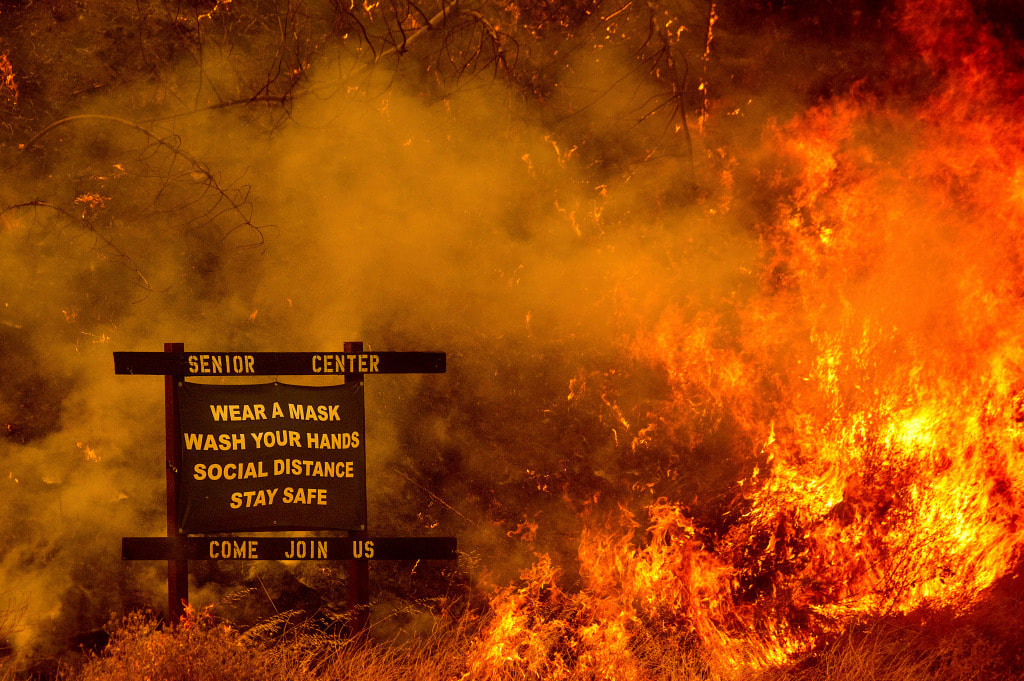 Wildfires in the US Credit MercuryNews

MPOC calls for Equal Treatment for all Edible Oil

​Malaysian Palm Oil Council CEO, Dr Kalyana Sundram, has made a call for all edible oils to be treated equally in terms of sustainability. As the European government and the United Kingdom looks to reduce deforestation in imports, Dr Sundram’s call is justified but unrealistic as other edible oils lag so far behind palm oil in proving their sustainability.

As part of his presentation at IPOSC 2020, a platform for the global palm oil industry, Dr Sundram lashed out at the absence of sustainability demands on other vegetable oils and fats. The full presentation can be accessed on the IPOSC website.

Citing facts and figures from independent studies, he highlighted that the global palm oil industry with a terrestrial footprint which contributed 2.3% to deforestation pales in comparison to deforestation caused by the meat and soy industries. He bemoaned the fact that criticism of palm oil has risen along with its market share.

“Today it (palm oil) ranks among the most consumed of the 17 different competing oils and fats. This progressive rise up the ladder has also come with a hefty price to the industry straddled with a myriad of controversies, critics and accusations of unsustainable operations throughout the supply chain.”
​
If there is a silver lining to the criticisms and controversies concentrated on palm oil, it has to be the fact that the palm oil industry is most ready to prove itself as a solution for mitigating climate change and biodiversity preservation. 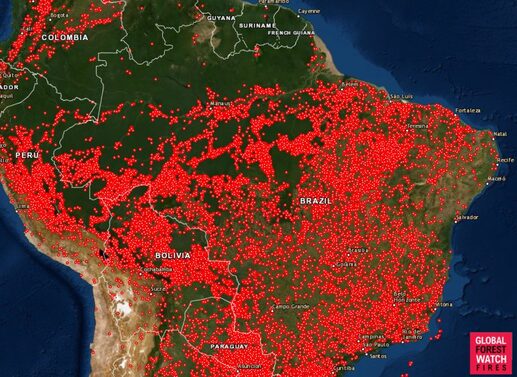 South American Fires 2019
Other edible oils like rapeseed/ canola are unprepared to meet the challenges of climate change and extinction as they have escaped criticism in previous years. With what we know now about the environment and the impact of agriculture, rapeseed and soy are increasingly being exposed as major contributors to climate change and biodiversity extinction.
​
Recent studies have shown for example, that grasslands or savannahs have an equally important role as rainforests in sequestering carbon, perhaps even better as the study by UC Davis reported. What this means is that the estimated 35 million hectares of land used to grow rapeseed, could be a huge carbon sink if they were returned to nature instead of being a source of carbon emissions in their annual tillage
Returning these millions of hectares back to nature would create a triple bonus for planetary health.  Carbon emissions from the annual tillage of these lands would be prevented. In their place, huge new carbon sinks would be preserved to fight climate change. Most importantly, it would remove a leading contributor to climate change in the form of nitrogen pollution which rapeseed is heavily dependent on. An updated report from 2020 repeated this warning that fertilizers in farming is “pushing climate change past worst case scenarios.”

The extinction rate of endemic wildlife in Australia, a top rapeseed producer, would surely fall if Australia removed rapeseed farming as one of the multiple threats to wildlife extinctions.

Swiss Re, one of the world’s biggest reinsurers and a linchpin of the global insurance industry has warned that:
“One-fifth of the world’s countries are at risk of their ecosystems collapsing because of the destruction of wildlife and their habitats.
Countries including Australia, Israel and South Africa rank near the top of Swiss Re’s index of risk to biodiversity and ecosystem services, with India, Spain and Belgium also highlighted.”

Australia, as a top exporter of rapeseed and sunflower oils, is outstanding in the Swiss Re report as a global leader in wildlife extinctions.

Laggards and Cons in Sustainable Commodities

Soy, sunflower and canola are so far behind in proving their sustainability that there is little chance that they can catch up to palm oil in time to meet the proposed legislations in the EU and the UK. Keep in mind that the EU and the UK legislations goals are to reduce carbon emissions and biodiversity loss even if the policy statements use the word “deforestation” to generalize their ambitions.

Despite Australia’s scandalous distinction, its exports of rapeseed for the EU’s biofuels requirements get a free pass with no questions asked of its sustainability.

Canada, as one of the biggest sources of rapeseed for biofuels in the EU, also gets “unfettered access” to the EUs biodiesel market. This achievement despite the fact that 50% of Canada’s wildlife is in decline.

That there, is the second biggest con in sustainable vegetable oils, as approved by the EU for its biofuels mandate.

The biggest con in sustainable vegetable oils is owned by soy

As a vegetable oil with the largest terrestrial footprint on earth, soy has managed to evade the spotlight until recent times. With wildfires burning forests in South America on a scale that made the 2015 fires in Indonesia look like a campfire, the scale of soy’s impact on earth was peeled back enough to raise global alarms.

5 of the Top 10 soy producing countries in the world are in South America. Brazil as the biggest soy producer in South America leads Argentina, Paraguay, Bolivia and Uruguay which cumulatively grow soy on an estimated 53 million hectares of soy.

The greatest con against sustainable edible oils is being allowed by the EU. Under political and economical pressure by the US, soy has been recognized by the EU as a sustainable source of biofuels despite all the evidence against its sustainability.

Soy is such a sacrosanct commodity that even vegans who boycott palm oil vociferously defend the inclusion of soy in their diet by insisting that soy is grown is animal feed. What of soy lecithin which is a common replacement for palm oil?

What of other untouchable commodities like cocoa which is threatening great apes with extinction?

Scientists and Media Supporting The Con
Shouldn’t the Zoological Society of London which publishes a report called SPOTT include soy, rapeseed and cocoa in its reports?

Claiming to “support the financial sector and supply chain stakeholders to manage ESG risk through transparency assessments of soft commodity producers and traders” the effort consists of looking only at palm oil, timber and pulp and rubber.

This heavy bias towards tropical commodities is typical of the “Selective and biased reporting” brought up by Dr Sundram.
A zoological society must surely have some interest in the animal kingdoms of the Americas or Europe.

As a source of information on the transparency of stakeholders in the palm oil industry, the latest report on palm oil by SPOTT was covered by Eco Business which is a slap in the face of palm oil producers. The report praised retailers that use palm oil and criticized growers by concluding that certified sustainable palm oil was a “con.”

If there is a “con” in sustainable palm oil, it is in the fact that media praises bombastic pledges that need only a stroke of the pen while condemning stakeholders that have invested real funds into making it sustainable as compared to other edible oils.

News media is the one fight that the MPOC must win as a first step in its endeavor to have all edible oils treated fairly. News coverage on deforestation of the Amazon due to soy continues to be rare compared to news coverage on palm oil. As awareness of the environmental impacts of palm oil substitutes come to light, scientific studies on the environmental impacts of palm oil and its alternatives provide inarguable evidence that palm oil is not the devil that popular media has made it to be.

Reported by Edie:
"The Common Agricultural Policy (CAP), voted on this week in the European Parliament and Council, will remain by far the biggest funding source for biodiversity protection schemes at EU level, despite claims that it has encouraged intensive and damaging farming." Edie.net

Reported by EU2020:
"Member states are deeply concerned about the global rate of biodiversity loss and recognise the need to step up efforts by addressing the direct and indirect drivers of biodiversity and nature loss, such as overexploitation of natural resources, climate change, pollution, invasive alien species and the way we use land and sea. The Council stresses that protecting, maintaining and restoring biodiversity and healthy, well-functioning ecosystems will contribute to boosting our resilience and prevent the emergence and spread of new diseases.

The conclusions adopted today give political guidance as regards the implementation of the strategy." EU2020

SBS Australia reported: The EU has adopted a 'life insurance' biodiversity plan aimed at protecting some ecosystemsEnvironmental groups have cautiously welcomed the move as a "much-needed beacon of hope", but said EU ministers had failed to make real progress on climate law.

Institute for European Environmental Policy opined: A preliminary assessment by IEEP shows that EU Agriculture Ministers and the European Parliament have failed to address six essential areas for keeping the green ambition of the next Common Agricultural Policy (CAP) alive.
IEEP has conducted a preliminary assessment of the European Council's and the European Parliament’s positions against six essential elements for keeping the CAP’s environmental ambition alive. Both institutions have failed the test. Their positions undermine 4 out of the 6 points, while the other 2 do not contain sufficient safeguards to firmly preserve or build on the environmental and climate proposals put forward by the European Commission.

A majority of MEPs voted against substantial improvements to the current harmful system, burying any hope of real reform of the 400 billion Euro funds to make them fairer to farmers or better for nature. [1]

Earlier in the week, Agriculture Ministers from the 27 EU countries also backed away from even moderate green goals, in favour of agriculture-as-usual. [2]