Iceland Supermarket based in Deeside, UK may have opened up the proverbial can of worms when it announced that it would ban the use of palm oil in store brand products.  Citing a concern for rainforests and orangutans, Iceland’s press release on the matter stated:

“Iceland has made this ethical decision to remove palm oil in order to demonstrate to the food industry that it is possible to reduce the demand for palm oil whilst seeking solutions that do not destroy the world’s rainforest.”

The press release made news headlines and was both praised and criticized with some suggesting that the decision to remove palm oil from its products maybe due to its consistently poor score on the ethical use of palm oil, earning only one point out of five as rated by Ethical Consumer.

Iceland Foods may yet learn that being in the spotlight could reveal all the warts and blemishes that otherwise may go unnoticed. Its rating as a supermarket overall was a similar 1 point out of 5 when ethical, environmental and policies on animal welfare were gauged.  Scott Poynton, founder of The Forest Trust tweeted:

“And...it’s a hollow gesture.. if Iceland Foods is worried about deforestation, it should drop soy, cocoa, beef and any other commodity linked to deforestation. And only own brand? Happy then to have deforestation in other products on its shelves?”

The company’s decision to remove palm oil from its own products has been criticized as a misguided one that would have little impact on rainforests and orangutans. Greenpeace UK questioned the decision as well and stated that any switch away from palm oil could have “serious environmental problems, including rainforest destruction.” 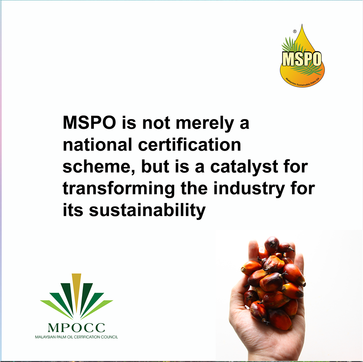 Introduced in 2015, the MSPO started a journey towards becoming mandatory in 2017 and targets to compel all Malaysia’s palm oil production as fully certified by December 2019. Of a total 5.8 million planted hectares in Malaysia, 1.5 million hectares have been certified under various certification bodies including the Roundtable on Sustainable Palm Oil (RSPO), the International Sustainability and Carbon Certification (ISCC) and Malaysia’s own MSPO. By January 2020, all of Malaysia’s palm oil operations is expected to be certified as sustainable. The MPOC which is the marketing and public relations arm of the Malaysian palm oil industry plans to redouble its information outreach to debunk the many misperceptions of Malaysian palm oil.
Interview
CSPO-Watch: Was the announcement from Iceland foods a wake-up call to the Malaysian industry to better inform the general public?
MPOC:  If the level of misinformation on palm oil is so bad that it would prompt a company to reject certified palm oil when the bulk of the said company’s product offerings like meats are not certified or shown to be sustainable, then we as an industry must respond with factual information to debunk the misperceptions of palm oil.

CSPO-Watch: What can the average consumer expect from MSPO certification?
MPOC: The certification complements Malaysia’s commitment to the Paris Accord which includes protecting its forested areas, currently at more than 50% of its total land area, to fight climate change. Prior to the creation of the MSPO, just under 20% of palm oil acreage was certified by global certification groups including the RSPO and ISCC. By making certification mandatory under the MSPO, the Malaysian industry will raise the quantity and quality of certified palm oil from Malaysia as the national requirement affects the whole landscape and not just certified areas. The application of the MSPO standards acts doubly to enforce the existing strict legislations governing the protection of both Malaysia’s environment and her citizens.

CSPO-Watch: The buzzword for sustainable agriculture seems to be “landscape” use. Will the Malaysian palm oil industry implement this concept?
MPOC:  In recognition of new scientific studies that have called for holistic landscape planning, the Malaysian industry will work towards reinforcing its existing conservation programs outside of plantation areas by boosting the conservation work already supported by the Malaysian Palm Oil Wildlife Conservation Fund (MPOWCF). Where at one time the industry felt it was sufficient to address market demands of sustainability by Western buyers and price by its Asian neighbours, the industry has acknowledged the scientific findings and the urgent calls to fight climate change and protect biodiversity and will act upon these new findings and recommendations.

CSPO-Watch: If you had a message for the consumers or buyers of Malaysian palm oil, what would that be?
MPOC: As one of the main agricultural sectors in Malaysia, we have the influence and the capacity to bring positive impacts to benefit the environment and the people through MSPO. With so many different certification schemes with their different standards, we will show the world that Malaysian palm oil is truly sustainable not only with words and policies but action on the ground. If we had to limit our statement to the world to one sentence, it would be:

“If palm oil has the capacity to do so much damage as the critics claim, then Malaysian palm oil will show that the crop has the same capacity to do far more good than previously thought possible. Already, our daily actions are beginning to reflect these objectives”