It is easy to fall for the narrative that indigenous peoples and the forests they live in are a solution for the climate crisis caused by others that live thousands of miles from them. Headlines like “They’ve managed the forest forever, it’s why they’re key to the climate change fight. LATimes” control the narrative.

Sensational headlines offering a “secret weapon to curbing climate change” like this piece from World Resources Institute offer up an irresistible option to fight climate change without affecting our personal consumption levels.

Beyond the simple assumptions of the World Resources Institute or the demands of “indigenous rights protectors” like Rights and Resources, is the larger down to earth issue where a booming human population is making it impossible for indigenous communities to make large land claims in order to maintain their hunter/gatherer livelihoods.

Deutsche Welle nails down the problem accurately in its report on “Granting Indigenous Land rights could save the climate – or not.”

The report by Deutsche Welle is unfortunately short and left the question of indigenous forests and climate change with a statement from Edwin Vasquez, who talked indigenous Brazilians.

"...they are not against development, but they want to be consulted about management of their territories.”

Similarly from the First Nations of Canada, an opinion from Dale Swampy asked:
"Indigenous Canadians want natural resources development — why aren’t we being heard?

Do not deny us our opportunity for well-being and prosperity simply to serve your stereotypes of what Indigenous peoples should be for and against.
Many Canadians have a one-dimensional understanding of Indigenous cultural, political and economic realities, based on the stories they see and hear in the mainstream media and the messages they get from politicians. We are often portrayed as a homogenous group with common interests, opinions and needs. One story that always gets attention is of Indigenous Canadians as victims of industry, protesting pipelines and other resource developments as they cross our territories." 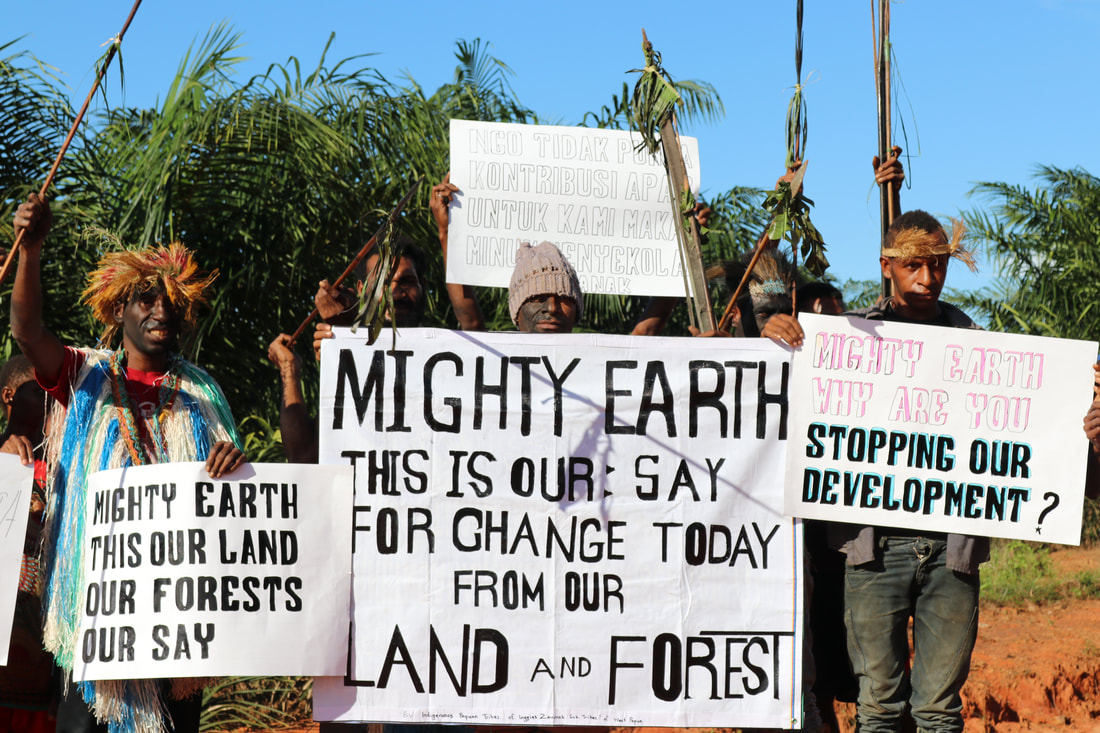 Indigenous Papuans condemn US group Mighty Earth
While the issue of land rights, development and indigenous peoples in Canada has to do with crude oil, in Southeast Asia, the same issues are being raised over palm oil.

In a damning statement against a US based group, Mighty Earth, indigenous clans in Papua, Indonesia released a press statement with images that declared “This is our land, our forests our say.”

Excerpts from their press statement indicate that the indigenous clans had signed an agreement with an Indonesian company, Korindo, to develop their ancestral lands for palm oil plantations from which they hoped, their future generations would not have to “live in the dark forests.”

More statements from the Papuan tribes can be seen on this series of home made videos on YouTube.

The case of the Papuan tribes to demand development on their ancestral lands will be an extreme test on how we define “sustainability” as their lands includes peat, which has been declared by foreign scientists as of optimal need for preservation to fight climate change in Europe.

Certification bodies for “ sustainable” products like the Roundtable on Sustainable Palm Oil (RSPO) have turned their backs to forest rich regions like Papua as “zero deforestation’ is part of their standards for “sustainable” certification. This is a blatant denial of the rights to development for Papuans who can only offer up their forested lands as an investment. If one takes a hard look at areas that have been certified as producing palm oil “sustainably,” it is obvious that these were forested areas not too long ago. If the only way to get the RSPO to consider certifying Papuan plantations is to plant only on degraded lands, the Papuan government should well consider ditching their land use plan and invite other industries to “brownfield” areas where they actually hope for palm oil development.

In the meantime, the “zero deforestation” policies of the RSPO continue to be questioned for its effectiveness. The annual war of words between the RSPO and critics like Greenpeace was dominated this year by the Environmental Investigations Agency which published another scathing report on the effectiveness of the RSPO. A summation of the words thrown back and forth can be read on REDD Monitor’s “Greenwash: How the RSPO fails to uphold its own rules.”

“The Indonesian Environment and Forestry Ministry has declared that the RSPO should assess its effectiveness as the sustainable palm oil certifying body, given that more than half of the palm oil concessions sealed by the authorities this year due to haze-causing fires burning within them are RSPO members.”

What upset the Indonesian Ministry was an article posted on Mongabay which questioned the effectiveness of the Indonesian moratorium. The article concluded with a comment from Teguh Surya, the executive director of the environmental NGO Yayasan Madani Berkelanjutan who “cited the example of Malaysia, the world’s No. 2 producer of palm oil, which has invested heavily in technologies and practices to boost productivity and improve sustainability” as a way forward for the Indonesian government.

The RSPO was not as generous with their views on the MSPO. In a press statement, the head of the RSPO’s  smallholder programme, Ashwin Selvaraj, was quoted as saying

“...the Malaysian government is putting in a lot of efforts at getting smallholders to be MSPO certified, the RSPO does very much the same.”

The comparison of efforts between what the MSPO and the RSPO has done to certify smallholders in their respective certification schemes should be read as an insult to the MSPO.

It has to be embarrassing to toss about big numbers in percentages knowing well that the base number is pathethically low. If the data on independent smallholders certified by the RSPO is correct, that would mean that at July 1, 2018, the RSPO only had 2800 independent smallholders certified. That is a sad statement on the exclusion of independent farmers whose lack of land titles is being used as a reason to exclude them from being certified under “sustainable palm oil.”

Mind you, the MSPO is also dealing with the same issue of certifying small farmers who do not have land title to their farms. Unlike the RSPO which has said it will only look at the small farmers once they have land titles, the MSPO is expected to use its influence with the Malaysian government to recognize the farm activities of these small farmers even as they fight for their land titles. This is expected to give the MSPO a boost in credibility for certified sustainable palm oil as the scheme recognizes the rights of the smallholders to farm on their ancestral lands.

These are the small details that must be included in the sustainability of any product unless that definition is confined strictly to consumers in developed countries. As the RSPO tries to recover some of its credibility by leaning on the attractive story of supporting smallholders, it may bring a handful of small holders aboard but it is certainly not going to make smallholders an inclusive stakeholder in the RSPO.

Until the day when the RSPO acknowledges that some deforestation will be needed for the development of forest rich but economically poor areas, it will remain a fringe certification for brands in the rich North and an inconclusive factor in “saving forests.”

The risks to its reputation from being labelled as an exclusive rich man's certificate has been recognized by the RSPO which is why it offering a solution different from anything in its standards or Principles and Criteria. The solution suggested by the RSPO for forest rich regions has been that of jurisdictional certification. The problem with that concept is that plantations that are the obvious cause of deforestation and even those that sit on peat lands, will gain certification.

How is this any different from recognizing zoned areas for development that are part of a sound land use plan like what Papua Province has?

The government for Papua province in Indonesia is working on its next 10-year plan which is expected to maintain large areas of protected forests especially those that contain indigenous villages. Papua could well become a model of sustainable development even in the absence of third party certification. As Edwin Vasquez was quoted by Deustche Welle, “This is the best way to contribute to cooling the planet.”