​The Dayak Oil Palm Planters Association (DOPPA) has to be one of the most vocal groups that represent small palm oil farmers in Malaysia. They issued an open letter to the EU Commission early last year as the commission was deciding on the use of palm oil as biofuel feedstock. Now that the EU Commission has decided in early 2019 that small holder grown palm oil can continue to enjoy subsidies, DOPPA is reaching out to the French government which had said prior to the EU Commission’s decision that France would phase out palm oil for biofuels. 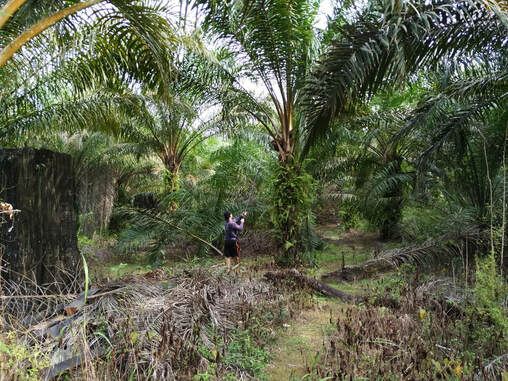 It is not known at this time, whether France will go along with the EU decision. For now, the challenge to the palm oil industry, as led by smallholders has to be inclusion of palm oil as a renewable energy that can be counted towards emission reductions targets. In the opinions of the indigenous farmers in Sarawak, their palm oil is not only sustainable but also recognizes the rights of indigenous peoples to development.
As such, they represent one of the most interesting contributors to Malaysian palm oil.

Malaysia is home to a whole host of different indigenous tribes. The tribes that call Sarawak home are especially interesting as the range of traditional cultures range from the sea faring Melanaus to the nomadic Penans.
Other tribes including the Ibans in the lowlands and the Kelabits in the highland interiors of Sarawak are more settled as their traditional livelihoods included farming for sustenance in addition to hunting and gathering.

The traditional crop was rice, which was a staple food as well as product for barter trading. The influx of cheap imported rice in modern times has led to the abandonment of rice cultivation as its low price meant that the farmers were no longer able to make a living off it. Some switched their farm lands over to rubber farms when rubber was a commodity in demand but when global prices of rubber fell as well, most of the indigenous farmers abandoned farming for a livelihood and the mass migration of rural peoples to towns and cities in search of work began.

Many found work in the booming oil industries in Miri city and Bintulu. As competition for work heated up in the oil industry in Sarawak, many of the Ibans struck out for even better jobs in Johor state in West Malaysia. This report in The Star from 2011 gives a good insight to their problems. A notable quote from one of the interviewees then still runs true today.

“One day I will go back and live in Sarawak. I’m worried that if I don’t take care of the paddy fields and rubber plantation in Engkilili, someone will grab it."

Since then, state recognition of cultivated indigenous land rights have removed the threat of losing the land to the next person that is willing to cultivate it but that has not provided opportunities for the Ibans to find a way to improve their livelihoods until oil palm was provided as an option.

In an effort to protect the cultural diversity and to stem the flow of indigenous peoples from Sarawak, the state government began a campaign to introduce oil palm farming as a cash crop. Incentives including free seedlings and fertilizers provided by the Malaysian Palm Oil Board were offered.

Where income from rice was available once a year, oil palm cultivation with its monthly harvest provided a stable income. The financial success of the indigenous farmers who switched to oil palm in the early days inspired a mass switchover from rice and rubber to oil palm. Data from 2018 indicates that some 28,000 Dayak farmers in Sarawak state have added oil palm to their farms which include other cash crops like durians or pineapples.

The financial rewards of the mixed cash crops is evident in the brick and mortar longhouses that have been made possible by the switch from rice. One could guess which family made the switch earlier or have more land by looking at whether a 4x4 was parked in front. Satellite dishes and flat screen TVs provided other indicators of the new found wealth provided by oil palm cultivation. Enterprising villagers made additional incomes with a transport service to pick up Fresh Fruit Bunches for delivery to collection centres.

Despite the potential income from every oil palm tree planted, a visit to their farms showed that the traditional of multi-cropping was still strong. One of the villagers jokingly suggested that it was easier to find rice in the supermarket but other than that, mature fruit trees that provided supplemental income in fruiting season and vegetable patches showed how these indigenous peoples were able to improve their livelihoods in such a short period of time.

In a visit to one farm, the farmer harvested edible ferns, bamboo shoots and ginger stalks for dinner that day. Ripe breadfruits, bananas and pineapples which were grown among the oil palm trees were also harvested. To the outsider, these farms look like an ideal setting for sustainable livelihoods where these farmers survived off what they grew and used the income from oil palm to buy what they could not grow.  The hard work involved in this idealistic lifestyle only became evident when went to work their farms.

The fact that most of the men have to work other jobs to supplement the family income meant that the womenfolk who are left behind to maintain the farms have to do everything that is required. This includes the carrying of fresh fruit bunches in traditional rotan baskets that weigh up to fifty kilos. For an average monthly harvest of 4 tons a month for these small farmers, getting the fresh fruit bunches to the roadside for pick up by scheduled trucks means making multiple trips across their farm monthly with the heavy loads on their back.

There were no complaints. What needed to be done was simply done. Fallen fruits were picked up as every fruit was worth something to them. There was only pride and a sense of achievement as they ended another work day.

There was a note of concern for low prices of palm oil globally and their fear is that it will drop as rice and rubber did. Training and support provided by the Malaysian Sustainable Palm Oil scheme has the potential to increase yields as a buffer against low pricing. Others are looking towards making their own organic fertilizers to save costs on having to purchase them. Theirs is a hard life which needs the support of global buyers that are looking for sustainable palm oil.