Update August 19, 2022. On this World Orangutan Day, 2022, Iceland Foods confirms that profit is more important than planet.
In an interview with Retail Gazette, Iceland boss, Richard Walker had this to say about palm oil and plastics

As the cost-of-living crisis continues to wreak havoc in the UK’s retail sector, keeping prices as low as possible is top of mind for all retailers.
This is hugely important during a time when some are having to choose between heating their homes or eating.
However, there are already signs that this laser focus on keeping prices low has meant another crucial focus for retail has been placed on the backburner – sustainability.
Iceland managing director Richard Walker, who has pioneered many sustainable initiatives over the past few years from becoming plastic-free by the end of the year to stamping out the use of palm oil, had had to back track on these green ambitions due to current macro-economic conditions.
Walker says the U-turn has been made with “huge regret” and admits to Retail Gazette that Iceland is currently in “survival mode” right now to overcome disruption and keep stock on the shelves.
“This is about survival,” he says.”If you want to have a profitable growing business, you can’t always do it sustainably.” Retail Gazette
Update March 31, 2022. Did Iceland Foods just sacrifice its proclaimed "ethical" position on palm oil over economics?
Iceland Foods UK made splashy headlines when it announced that the UK based supermarket would ban palm oil from store-branded goods. The company tried to wiggle its way out of the failed palm oil ban with long explanations like this one.

The failure to ban palm oil from its products is not the first time that Iceland Foods has been caught making promises the company cannot keep. Edie reported this week that Iceland Foods is unlikely to meet its commitment to remove plastic packaging from store branded products.

But consumer memories are short. Iceland Foods knows this as their shoppers continue to purchase frozen foods in plastic packaging.

Brand damage is however, long lasting. Iceland Foods has not only failed to ban palm oil but continues to fail its pledges towards eliminating plastics and supporting humane food production.

Retail Week asked "The big debate: Is Iceland right to roll back on its palm oil promise?"

Jason Reed, who is the UK Lead at Young Voices and a political commentator for a wide range of outlets offered Iceland Foods a solution once the company cleans the mud off its face.

Update March 28, 2022. Iceland Foods UK reverses ban on palm oil
The supermarket chain will start selling a limited range of own-label products from June that contain palm oil after it banned the ingredient in 2018 in a stand against tropical deforestation.

UK food manufacturers have warned that supplies of the commodity could run out in weeks as crops are trapped in Ukraine and Russia, which together account for almost 70pc of the world’s sunflower oil.

Richard Walker, Iceland’s managing director, expressed “huge regret” about having to row back on its pledge to remove palm oil from all of its own-brand items.

He said: “The only alternative to using palm oil under the current circumstances would simply be to clear out our freezers and shelves of a wide range of staples including frozen chips and other potato products.”

He said that the move was “a last resort and a strictly temporary measure” and it would only use certified sustainable palm oil as an ingredient. Telegraph UK 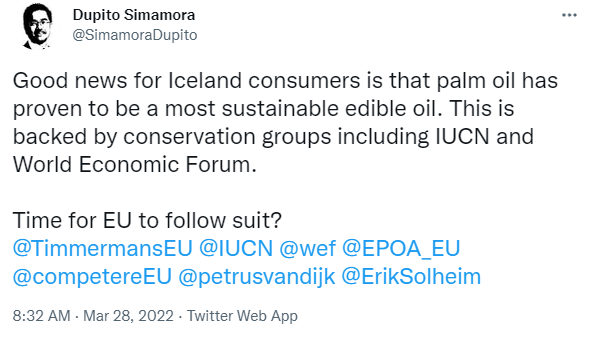 Update June 13.2019. The article below refers to Iceland Foods, a supermarket in the United Kingdom. This is not to be confused with Iceland the country or its foods or Icelandic cuisine. For an introduction to the gastronomic experience in Iceland, please visit this website which has a really entertaining article on Icelandic foods as well as cheap tour packages to Iceland, the country. We would try all of them except the last on the list but perhaps you're more of an adventurer when it comes to exotic foods.

UK supermarket, Iceland, created a buzz today when it announced that it would phase out the use of palm oil in its store-brand products. This move follows the company’s trend to remove controversial materials from its products like plastics. This is similar to its announcement on plastics where Iceland supermarket pledged to: 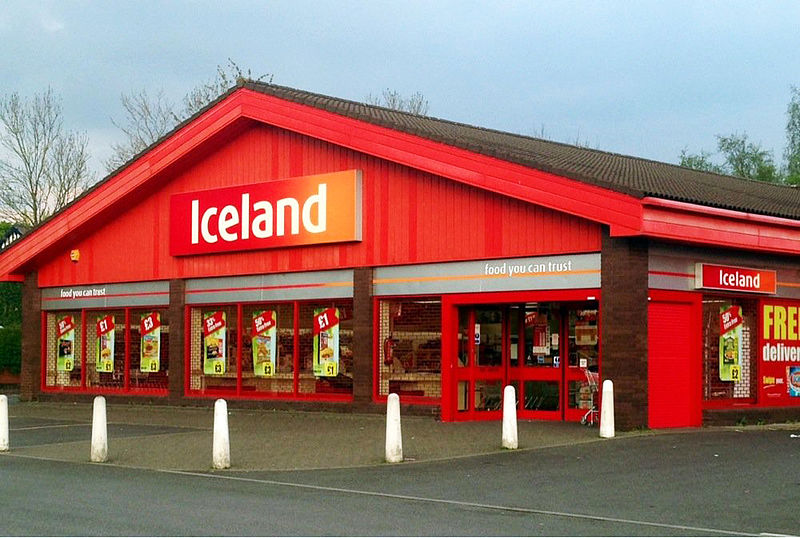 Image By Adcro - Own work, CC BY-SA 4.0,
The company is showing a surprising ignorance of what happens in the real world or perhaps this was another clever marketing ploy to garner shoppers that otherwise may not shop at Iceland. Its Facebook page is already plugging a new video to donate £1 towards orangutan rescue for every share of its marketing video. This is a very clever inexpensive marketing method to deliver maximum coverage for the cheapest cost. At this time of writing, the video has been shared 3500 times which would obligate the company to donate a tax deductible amount of £3500.

This clever marketing ploy may well create incredible returns on marketing budgets on the back of orangutans but it shows a wilful ignorance of how things happen in the real world. Its pledge to use pulp and paper packaging for example, completely ignores the fact that the pulp and paper industry in Indonesia is one of the biggest causes of deforestation there. Grand sounding statements like “recyclable through domestic waste collections or in-store recycling facilities” fall short on details of how it will deal with the wastes collected. Does Iceland supermarkets indeed have the resources to ensure that its pulp and paper packaging does not come from forests or that it has the facilities to recycle all paper wastes collected? The UK’s recycling guide indicates that contaminated waste papers such as those for paper food trays may end up in the landfill if not incinerated outright.

The marketing staff at Iceland should be commended on their ability to pick up on popular sentiment to maintain their market share in a tough retail environment but it looks like they aren’t sharing everything they know. They have appealed to the anti-GMO consumer segment and the movement of the year in anti-plastics but when it comes to the anti-palm oil commitment, shoppers beware. The substitutes for palm oil that they are using are no better or possibly even worse than palm oil.

Iceland managing director Richard Walker was widely quoted as saying there was "no such thing as properly sustainable palm oil." As Businessgreen reported, instead of palm oil, Iceland said it will use alternatives such as sunflower oil, rapeseed oil, and butter. Let’s hope Iceland supermarkets has found proper sustainable vegetable oils or butter.

Sunflower and rapeseed oil, both of which are common industrial crops grown in Europe, are threatening European biodiversity with 'biodiversity oblivion' as experts warn that intensive farming and pesticides could turn Europe’s farmland into a desert that ultimately imperils all humans.

Will Iceland supermarkets guarantee their shoppers that their own-store brands will not lead to biodiversity collapse in the UK?  Will their sources of sunflower, rapeseed and other vegetable oils be certified proper enough to meet their standards? Should they choose to use butter instead of palm oil in their cookies, will Iceland supermarkets be transparent with their shoppers and show how their source of butter comes from humanely treated cows who are not fed with deforestation tainted GMO soy that threatens Amazonian forests?

Telling half the truth to appeal to popular sentiment may work well for Iceland supermarkets to maintain profitability but suggesting that their palm oil ban will save rainforests in Indonesia is a stretch. Even if Iceland supermarkets was a mere mosquito in a roomful of elephants disguised as palm oil companies, it would have a bigger impact on saving forests and orangutans if it continued to buzz the industry towards sustainable practices.

As for animal cruelty which Iceland supermarkets wants to remove from its palm oil to save orangutans, lets hope that their beef and pork products were "properly sustainable" and free of the violence against animals that is inherent in the meat industry.

Should NBPOL not have the required palm oil product to meet Iceland supermarket's product performance metrics, the optional source is Daabon Organics whose palm oil is equally deforestation and orangutan free.
​
The purpose of publicizing these sources of certified sustainable palm oil is not to call out the bull behind Iceland supermarket's plan to ban palm oil but to show there is credible sustainable palm oil readily available that could save the natural landscape and biodiversity of the UK for British shoppers plus a bonus of not hurting orangutans.