​Chocolate season, otherwise known as Easter is over. As the Easter themed packages go on sale, questions about the sustainability of the palm oil used in them remain. Greenpeace reported last month that “global brands are divided over transparency efforts to tackle deforestation for palm oil.” Did the companies which refused to reveal their supply sources of palm oil have something to hide?

Ken Hardi from the Centre for Orangutan Protection in Indonesia was quick to respond to the Greenpeace report by posting on his Facebook page: 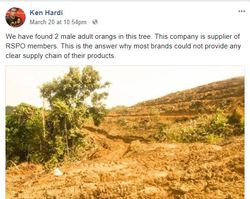 Were the companies really afraid of revealing their palm oil sources for fear that it might be associated with orangutan extinction? Or were they afraid of opening up a new can of worms? This annual event of questioning the quality of palm oil and social media calls to boycott palm oil is a misguided spotlight (exceptions here for orangutan rescue groups ) on what is typically a side ingredient in chocolates. The report on Easter chocolates by the University of Manchester provides a clearer picture of the total environmental impact of chocolates.

The main ingredients, by volume, of the average chocolate is sugar and cocoa, then followed by side ingredients including milk powder, palm oil and/or soy lecithin. It only makes sense that if consumers are concerned about the sustainability of the chocolates they buy, they should ask about the main ingredients first.  The heavy social and environmental impacts of sugar and cocoa are well documented but the average consumer rarely gives a second thought to where they came from.

For the purpose of this writing, the annual calls to boycott palm oil at Easter time is more interesting. Boycott organizers seem to know about the problems associated with palm oil but never question the one ingredient that chocolate manufacturers would use if they replaced palm oil: soy lecithin.

According to Friends of the Earth, Europe:

"Soy production is one of the biggest drivers of deforestation in South America. It causes widespread environmental damage, increases the use of pesticides, contributes to food insecurity, and is associated with violence and human rights abuses amongst local communities and farmers… About 16 percent of the Amazon forests and 60 percent of the Cerrado grasslands have already been lost. It is estimated that a further 10 million hectares of Cerrado could be lost to soy expansion by 2020, and 40 percent of the Amazon rainforest by 2050."

Brazil alone has planted 35 million hectares of soy, surpassing the total global acreage used to plant oil palm which is approximately 21 million hectares. What if we flip the crops around and say Brazil planted oil palm instead of soy? The oil palm crop yields 3-4 times more per acre of land than soy. Let’s take the modest estimate and say oil palm is only 3 times more productive. It would still mean that some 23 milliion hectares of forests and savanahs could have been saved from agriculture in Brazil. As this recent report on sugar cane’s threat to the Amazon rainforests show, Brazilian agriculture could surely use the land better if it grew palm oil instead of soy.

The suggestion that comes with a boycott of palm oil is that the rich biodiversity and ecosystems of south America is less important than those found in Southeast Asia and are therefore expendable. This smells of speciesism in favoring one animal species (prangutans) over another (jaguars)

The truth is no one has to choose between saving the orangutans in Southeast Asia or the jaguars in South America. Both can be saved if consumers demanded sustainable crops whether it be palm oil or soy or sugar.

The positive impact of all the anti-palm oil campaigns is that it has brought attention to the need to save Southeast Asian forests as evidenced by Malaysia’s ambitious project to certify its palm oil production. In Indonesia where most of the negative news on deforestation and threats to the orangutans comes from, certification bodies like the Roundtable on Sustainable Palm Oil is establishing itself as an effective measure to reduce deforestation in its certified palm oil. Its standards for producing sustainable palm oil are being used in other producing countries, most notably Ecuador.

The chances of north American consumers being able to buy into Easter chocolates containing sustainably produced palm oil by 2020 looks good and that, unfortunately, is the only good news. Major suppliers to the chocolate industries including Blommers Chocolates and Barry Callebaut are on track to deliver certified palm oil in their chocolate offerings to their customers.

But whether that Easter bunny chocolate we buy in 2021 is sustainable is questionable as the main ingredients in cocoa and sugar are years behind in establishing their sustainability credentials. This looks like a good time to shift the spotlight away from palm oil and onto cocoa and sugar if we want socially and environmentally responsible Easter chocolates.

Updated October 29, 2020. Beyond the scary impacts of soy which has been well reported since we first wrote this commentary, cocoa has also emerged as a culprit responsible for deforestation threatening the extinction of wildlife from Africa to Indonesia.

FoodNavigator reported in March, 2020 that:
"Cocoa production continues to drive deforestation. While the chocolate industry has largely lined up behind zero deforestation commitments, the complexities of indirect supply chains remain a significant challenge."

Bloomberg reported in May 2020 that:
"Deforestation has long been a pressing issue in supply chains, with forest area in top grower Ivory Coast falling to 3 million hectares in 2018, a decline of more than 80% since the 1960s."

A history of deforestation for cocoa was reported by Agence Presse France which wrote:
"Massive deforestation. As cacao plantations spread, the country has over the past half century lost almost all of its forests.

They now cover only two million hectares (4.9 million acres) compared with 16 million in the 1960s."

As Halloween 2020 approaches, consumers must demand that the cocoa used in their chocolates did not cause harm to primates all over the world or cause massive deforestation.