The elevation of relationships between the EU and ASEAN countries to strategic partnership has created a new platform for the palm oil industry to present its best face.
​
Members of ASEAN including Indonesia, Malaysia and Thailand represent some of the biggest producers of palm oil globally.
The “Co-chairs' press release of the 23rd ASEAN-EU ministerial meeting” spoke in glowing terms of the close relationships between the EU and ASEAN countries. The important bit to the press release was the announcement of a Joint Working Group to discuss SDGs in the vegetable oil sector.

Responses from Indonesia and Malaysia has been positive.

Indonesian Foreign Minister Retno Marsudi urged the European Union (EU) to give fair treatment to the commodity in her argument against the present EU decision to phase out palm oil as a renewable source of energy.
​
Malaysia’s Foreign Minister Datuk Seri Hishammuddin Tun Hussein said both sides need to iron out pending issues, mainly in relation to the element of vegetable oils in the Terms of Reference (TOR) of the Joint Working Group (JWG).

Despite the glowing terms and positive language, the palm oil industries in Indonesia and Malaysia ramp up their arguments from the simplistic “we still have plenty of forest cover” to sharing more details of how the industry can be a stakeholder in the global fight against climate change.

This should not be much of a problem as both Malaysia and Indonesia have taken great strides towards producing palm oil sustainably. Indonesia as the lesser developed of the two will likely continue to argue for the need to alleviate poverty in the country. Malaysia which has the benefit of a mature palm oil industry and a national scheme for sustainable palm oil in Malaysian Sustainable Palm Oil (MSPO) should have no issues in making a convincing case of the quality of its palm oil.

The German Question
The big question on the softening position of the EU against palm oil is how will EU powerhouse Germany respond to the use of vegetable oils for energy? Germany’s environment ministry (BMU) has already said it wants to stick to its draft law proposal for the use of renewable energies in the transport sector – including the severe limitation of food and feed crops and palm oil in biofuels by 2026.

The transport sector in Germany as far as palm oil is concerned focusses mostly on the use of biodiesel but as the country promotes electric vehicles to reduce Germany’s emissions, the obvious question becomes the source of electricity.

So what power source will Germany use to charge the batteries? There is a lot of hype behind Germany’s drive towards renewables but beyond the hype are “notable challenges” to reduce emissions from its transport sector.

According to a Forbes report:
“Despite much hype, Germany still generates just 35% of its electricity from renewables. And if biomass burning, often dirtier than coal, is excluded, wind, water and solar electricity in Germany accounted for just 27% of electricity generation in 2018.”

Another report by the New York Times called the German struggles for energy “The Tragedy of Germany’s Energy Experiment”
“The plan risks more than a shortfall in supply. It could also prevent the country from dealing with climate change. By shutting down nuclear plants faster than those for coal, Germany may consign itself to dependence on fossil fuels, and all the damage to the climate they cause, for longer than necessary.”

This could reduce any emissions savings the German government has pinned on electric transport as this report on EVs and emissions in Japan shows.

Palm Oil as a Renewable Source of Energy
If Germany and the EU at large is to achieve their ambitions to reduce emissions, it is obvious that biofuels will need to be included whether as biodiesel or energy to power EVs and factories.

The challenge to the palm oil industry in Malaysia and Indonesia will be to present their product as a necessary input to effectively reduce emissions from the EU. The key point to be made at the JWG is that any increased use of palm oil as feedstock for biofuels will not lead to rampant deforestation.

One of the strongest points that needs to be made is that existing palm oil plantations can meet global demands for food and fuel simply by improving efficiencies. Millions of hectares of smallholder oil palm farms in Indonesia and Malaysia produce a meagre >2 tons per hectare when the potential is for <3.5 tons per hectare. The knowledge on what needs to be done to increase yield from existing planted areas is there but what is needed is the financial incentives from programs like RED ll.

What comes out of the JWG has far reaching impact beyond the EU and palm oil producing countries of ASEAN. A positive outcome in the way of continued support for palm oil in RED ll would encourage Japan to relook at palm oil as a source of renewable energy, something the country sorely needs.

Covid-19 has unfortunately sucked the wind out of Malaysia’s certification of its palm oil under the MSPO and delayed conservation initiatives planned by the Malaysian Palm Oil Council’s Wildlife Conservation Fund. This would have been a great example of a sustainable vegetable oil at the JWG sessions.

There is no doubt that the EU needs a source of renewable energy like palm oil where the trees continue to stand even as it powers the EU. In the grand scheme of things, the EU must help to balance out the economic forces at play which will shape the political future of the EU and ASEAN. A minor sticky point like the sustainability of palm oil can be easily removed by the Malaysian model.

The draft allows for a rise in Germany's greenhouse gas (GHG) emissions reduction obligation from 6pc now to 6.5pc in 2022, 7pc in 2023, 8pc in 2024 and 10pc in 2026. In 2028 this will jump to 14.5pc and then to 22pc in 2030. ArgusMedia
Update December 19, 2020. ​Germany is to increase the greenhouse gas reduction quota for transport fuels from currently six to 22 percent in 2030, an environment ministry bill which has been approved by the other ministries states. Companies that supply fuel in Germany are obliged to reduce the greenhouse gas emission of all the products they place on the market by a certain percentage: the greenhouse gas reduction quota. CleanEnergyWire
Update December 18, 2020. Indonesian Palm Oil Association (GAPKI) has made its submission to the EU Forests Regulation public consultation on reducing deforestation and forest degradation.

As background, the European Commission is proposing a Due Diligence regulation to tackle deforestation / forest degradation with the aim to prevent European imports and consumption ‘causing’ deforestation, particularly from tropical forests.

To be clear: the Indonesian palm oil community broadly supports policies to prevent deforestation, and believes that this should take place with enforcement and compliance at the domestic level. An indirect measure that curbs trade and exports from developing countries to the European Union – such as a unilateral EU regulation – will not stop deforestation, and will instead undermine efforts to combat it.

It is also GAPKI’s view that introducing unilaterally developed sustainability criteria for a Due Diligence regulation will disrupt trade between the EU and Indonesia, undermine the recent signing of an EU-ASEAN Strategic Partnership and may consequently expose any European Union regulation to challenges under the WTO Agreements.

Moreover, GAPKI believes Indonesia’s legality and sustainability certification system for palm oil (ISPO) can and should serve as the basis for sustainability and legality assurance for any European Union due diligence requirements going forward. Read full statement from GAPKI
Update December 14, 2020. The Canadian government is looking to reduce its land use restrictions in a pending Clean Fuel Standard.
According to the Canadian Canola Council, "the EU biofuel market represents a significant opportunity for Canadian canola. Canadian canola is already a qualified feedstock for use in EU biofuels thanks to the CCC’s past efforts, but exporters and growers need to be certified if they choose to take advantage of this opportunity. This certification is necessary to meet the EU’s market access requirements, which are outlined in the Renewable Energy Directive (RED)."

Should the simplistic certification for Canadian canola qualify as a clean source of biofuels for the EU, should the EU extend the same standards to palm oil ​in the Joint Working Group?
Updated December 12, 2020 with an opinion from ​Jan Willem Blankert "​The EU-Asean dance: an EU diplomat's account"
"Asean's most remarkable achievement is its cooperation and 'Integration-Lite' policies vis a vis its neighbourhood. Asean is the driver of the East Asia Summit (EAS), a regional cooperation structure that includes China, Japan, Korea, India, Australia, New Zealand, Russia and the US.
The EU has desperately tried to join the EAS, but made the strategic mistake of seeing the EAS as solely a security forum and making the case that Europe should join as a security partner. It isn't and will never really be."

In other news "EU Chiefs Back Tough Emission Goal After Last-Minute Scuffle"
(Bloomberg) -- European Union leaders have agreed to more aggressive cuts in greenhouse gas emissions over the next decade, one year after launching a moonshot Green Deal that led the way for other major economies to raise their climate ambitions.

With Fuel Combustion and Transport emissions accounting for 78% of EU emissions, questions remain on how the EU will reduce emissions from these sectors without the use of biofuels. See chart below for sources of greenhouse-gas emissions from the EU. 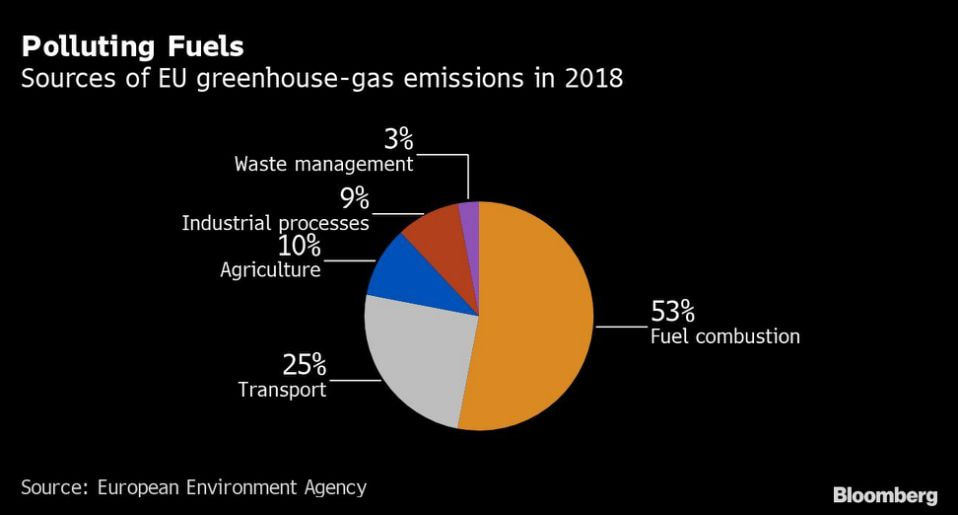