Together, members account for roughly 85% of the world economy; that's around three-quarters of global trade and two-thirds of the world’s population.

Amid the global financial crisis in 2008, it grew into the leaders’ summit, a place where presidents and prime ministers could get together for two days to try to solve the world’s economic problems. WEF

Indonesia’s Targets as President of G20
As a leader’s summit where various global issues will be examined in search of solutions, Indonesia has scheduled three Trade, Investment, and Industry Working Group (TIIWG) sessions the first of which will take place at the end of this month.

Updated information can be accessed through the Ministry of Communications and Informatics ( KOMINFO ) website which will provide a media center to disseminate information on Indonesia's G20 Presidency pertaining to events during discussion forums and the country's role in chairing the international event. Full event details and schedules can be accessed through G20.

Sustainable Energy Transition as a key priority for the G20 under the Presidency of Indonesia is of special interest as there are numerous issues with this global goal.

As it pertains to Indonesia, two key problems stick out.

The first has to do with palm oil, which Indonesia is relying on to reduce the country’s dependence on fossils fuels. This is an admirable goal considering the reactions to the recent IPCC report which identified fossil fuels as the source of climate change. However, both the EU and the US have placed restrictions on the use of palm oil as renewable energy.

Indonesia, as the biggest producer of palm oil globally, sees the positions taken by the EU and the US as a measure to protect their industries in plant-based energy sources in rapeseed, corn and soy which discriminates against palm oil from developing countries.

The second has to do with equitable development which provides an undisputable case of discriminatory practices by developed countries against developing countries.

Numerous datasets have identified developed countries like the EU and the US as being the cause of climate problems today. Yet as Indonesia tries to develop a downstream industry in renewable energy from wind and solar sources, its decision to restrict the export of raw materials in favour of industrialized jobs for Indonesians has been attacked by the EU which actually sued Indonesia at the WTO over this matter.

“Renewable Energy?” From Finite Supplies of Metals
The mad rush towards “renewable energy” by the EU towards wind and solar energy which depends on finite supplies of precious minerals such as Indonesian nickel will face questions as activists wake up to the environmental destruction left in the wake of this new “renewable energy.”

Investors are questioning whether low-carbon policies which stoke the demand for lithium, cobalt and copper are sustainable.

Mainstream media is catching on to this new waking campaigns as The New Yorker featured “The Dark Side of Cobalt” with ABC Australia running its own feature “Blood cobalt-One of the poorest countries on Earth is paying a heavy price for the world’s green energy revolution.”

The inequities are further questioned by the New York Times which questioned “WHAT DO THE PROTECTORS OF CONGO’S PEATLANDS GET IN RETURN?”

Indonesia which has been through the wringers offered by developed countries has undoubtedly learnt from past mistakes when it scrapped the meager offerings of Norway and cancelled its deal with fossil fuel enriched Norway.

This action should in fact be seen as an action by Indonesia to divest itself of fossil fuel funds along the same lines of world renown universities, religious groups and the World Health Organization (WHO).

Towards its commitment to fighting climate change, the Indonesian Ministry of Foreign Affairs reaffirmed its pledge in its public response.

The decision to terminate the LOI will in no way to affect the Indonesian Government commitment to reduce greenhouse gas emissions.

Indonesia’s Trump Card-Forests
When it comes to palm oil or rather the questions that swirl around the sustainability of Indonesian palm oil and the many alarm calls of orangutan extinctions, Indonesia holds a trump card.

The Indonesian Minister of the Environment and Forestry, Siti Nurbaya, emphasized Indonesia’s commitment to the global community at the recent kick-off of the G20 meetings.

The on-going war between Russia and the Ukraine has meanwhile raised more questions for the EU policies on energy especially.

Even as EU powerhouse Germany considers keeping its nuclear power plants running in light of the war, the EU overall should reconsider its position on palm-based biofuels for transportation and energy.

With all the new “woke” campaigns surrounding the EU use of precious metals, biomass and biofuels from soy, the stark discrimination of developed countries as exemplified by the EU ban on palm-based biofuels and its lawsuit on Indonesian nickel exports must be removed if the G20 is to build back stronger together.

This is especially important if the EU is to realize its ambition as a global leader in fighting climate change when its Common Agricultural Policy and the related 30x30 goals are out of reach.

The anti-deforestation laws as eyed by the EU to reduce imported deforestation may please some EU policy makers but Indonesia with its presidency of the G20 has lessons to impart to the G20. The trump card being that much of Indonesia remains forested well above the 30% aspirations of the EU despite its status as the global leader in palm oil production. 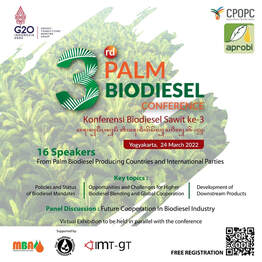 The Council of Palm Oil Producing Countries (CPOPC) has organized a webinar for March 24, 2022 where the focus on biodiesel in a transition from fossil fuels will look at the various issues in energy transformation.

In an emailed response to CSPO Watch, one of the organizers of the webinar explained that the current use of biofuels is not enough to fight climate change.