​The government of Ecuador has visions of becoming a global supplier of sustainable foods. As a major exporter of meat and plant products including cocoa and bananas, palm oil is currently a minor export commodity but there are plans to increase palm oil production. In a recent meeting with the Minister of Agriculture, Ruben Flores and foreign journalists from Food Navigator, Food Processor and CSPO Watch, the Minister unveiled a new five year plan for developing the country’s agriculture sustainably with a focus on palm oil.

Noting wryly that Ecuador had missed an opportunity to develop the palm oil industry in the boom demand years of the 1990s, Minister Flores pointed out that in a visit to Malaysia, he was astounded to find out that Malaysia had three hundred plus different products derived from palm oil while Ecuador had three. Regardless of the late start, Ecuador today has plans to expand its planted areas for palm oil which has seen a slow growth of only 80,000 hectares between 2005 and 2018. This may not look like a lot in comparison with the growth of palm oil industries in other countries but it has been identified as a source of deforestation that was of concern to the government. 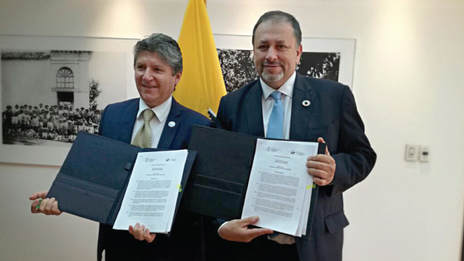 Jurisdictional Certification to control land use

This should come as no surprise to anyone familiar with the strong Ecuadorean respect for nature. As the first nation to adopt the Rights of Nature into its constitution, this paradigm shift in how humanity looks at its natural resources is providing the framework for Ecuador’s plans to become a global supplier of sustainable agri-products.

As one of the most bio-diverse countries in the world, the work of conservation groups like Conservation International and external support from Global Environment Facility (GEF) have laid the groundwork for its goals towards sustainable development. A key influence towards the goal of sustainable agriculture was inspired by the Roundtable for Sustainable Palm Oil (RSPO) which recognized Latin America as a new frontier for the development of sustainable palm oil.

As a non-profit whose mandate is to remove deforestation and social conflicts from corporate supply chains, the RSPO has been criticized as an ineffective measure to reduce both but in an environment where the government stands behind sustainable agriculture, the RSPO‘s standards will get a chance to show how effective they can be when implemented. This is a strong endorsement for the RSPO whose principles and criteria are being adopted by Ecuador's national plans for sustainable agriculture to “meet the certification demands of the global market” as Minister Flores puts it.

The current production from Organic Crops is only about three hundred tons monthly but its success in finding foreign buyers supports the Minister’s push for certified products to meet market demands.  It is noteworthy that not only is Organic Crops certified under the RSPO for sustainable palm oil but it counts among its other certifications, USDA Organic, CERES, Control Union and OKO Garantie.

This farmers group currently supplies its palm oil to Ciranda USA as well as select buyers in Germany and will be making their first shipment to China as it has been certified by China Organic Product. The main partners, Jose Antonio Arellano and Rodrigo Paez were justifiably proud that their staff were all shareholders in this showcase of sustainable palm oil in Ecuador.

Can Ecuador shrug off the socioecology problems associated with palm oil?

Organic Crops may look like an extreme model of certified sustainable palm oil to outsiders that know palm oil only as massive industrial operations but in Ecuador, the traditional spirit of “minga” or communal efforts is making it easier for the government to organize small farmers into farm cooperatives as evidenced by the national plan under Gran Minga Agropecuria.

To facilitate the governments vision of producing certified agricultural products to meet the certification demands of global markets, financial incentives are being provided to local industries through two schemes. One is through the Bank of Ecuador where $1.2 billion dollars have been allocated to facilitate the move for agri-industries towards sustainable production. The second one is a proposal within its five year plan to provide tax breaks for certified sustainable exports to contribute to a fund to support smallholders and sustainability practices across its agricultural industries.

Much has changed in Ecuador since the release of the documentary La Fiebre de la Palma in 2014. A notable statement from Minister Flores at our meeting was that “behind every banana, cocoa and mango, there is a farmer.” This sentiment was echoed by the farmers we met at Organic Crops. These are farmers who grow foods for subsistence and have added oil palm to their cocoa and banana crops for income. Their request was for the world to know that palm oil produced in Ecuador was different from palm oil produced elsewhere. As for their decision to add oil palm to their crops, one farmer said it best when she said “ las palmas is a generous crop that gives every fifteen days.”

The long term success of the Ecuadorean effort towards sustainable agriculture and palm oil in particular will hinge on market demand. Ecuador has the means and the will to become a source for sustainable consumer products for global consumption.  Its proximity to the US and Europe where demand for sustainable palm oil is strongest should make it easy for Ecuador to get its palm oil into consumer products. However, the premium costs incurred from sustainable production methods may become its biggest obstacle to the market. As an example, Organic Crops has taken a noble position to pay their farmers a higher fixed price for their organic fruits rather than subject them to the global commodity price fluctuations. Jose Antonio explained that in organic farming for small farmers, price stability is important to incentivize the small farmers to continue the laborious work in organic farming.

The recent formation of the North American Sustainable Palm Oil Network (NASPON) to increase the use of certified palm oil for the US market should be a major contributing factor to the growth of the sustainable palm oil industry in Ecuador. Minister Flores welcomed the suggestion of foreign investments in the industry especially for downstream products to bring a more equitable share of wealth.

Note: Travel expenses for this report sponsored by the Roundtable on Sustainable Palm Oil (RSPO). Views and opinions remain those of CSPO Watch