What happens when indigenous peoples, having legal title to their ancestral lands, decide that developing their lands for oil palm is their choice?

The press statement from DOPPA, published in full below, shows some keen insights to the questions of deforestation, indigenous land rights and sustainable development. 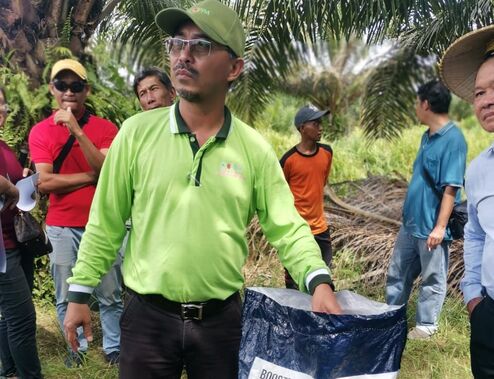 DOPPA is prepared to work in cooperation with the ministry on several unresolved issues affecting all Dayak smallholders in Sarawak. The national NDPE (No Deforestation, No Peat, and No Exploitation) policy cut-off date of December 31, 2019, is the most important matter that must be addressed concerning the Malaysian Sustainable Palm Oil agenda.

DOPPA is requesting the Ministry of Plantation and Commodities to establish a system that will allow indigenous smallholders in Sarawak to continue cultivating their NCR land after December 31, 2019.

DOPPA will continue to encourage the Dayaks and the indigenous community to continue planting oil palm in their NCR lands as a way of life and in support of the state government's objective to improve rural socio-economic situations through oil palm cultivation. To confirm the land status of smallholders in Sarawak, DOPPA will also work collaboratively with the state government through the Ministry of Food Industry, Commodity and Regional Development (M-FICORD).

DOPPA requested the Ministry of Plantation and Commodities to continue the replanting and new planting incentives to all smallholders through MPOB due to the current high cost of agricultural inputs, notably fertilizer and other agrochemicals.

DOPPA urged MPOB to review the current criteria for applying incentives, which also requires evidence of ownership in the form of a land title to qualify for the incentive. DOPPA clarified that despite the land being gazetted by the state government under the Native Territorial Domain Sarawak Land Code, not all land with NCR status has been awarded land titles.

Concerns were also expressed by DOPPA on the introduction of the EU Corporate Sustainable Due Diligence (CSDD), EU Deforestation Regulation and EU Forced Labor Regulation on the export of palm oil end products to European countries.

The EU's action against palm oil may have a significant negative impact on smallholders in Sarawak. DOPPA emphasized that the regulations were developed without the participation

of all parties involved in the Malaysian palm oil supply chain, and as a result, the EU Parliament's enforcement of the regulations is perceived as a protectionist measure for EU edible oil products like rapeseed and sunflower oil.

For smallholders in Sarawak, the area cultivated for oil palm is modest, with an average of 3 hectares per family, and the majority of the area developed is ex-shifting agriculture operated by family members. The DOPPA urges the EU to be more inclusive when developing regulations that affect indigenous oil palm farmers in Malaysia.

The DOPPA emphasized that if the restrictions are enforced unilaterally on Malaysia's palm oil industry, smallholders of oil palm, particularly in Sarawak, will be adversely impacted. Regulations from the EU may be seen to violate human rights since they discriminate against the Dayak community and other indigenous groups in Sarawak, preventing them from achieving socio-economic advancement.

The EU's requirements have all been addressed in the revised Malaysian Sustainable Palm Oil (MSPO) standards, and DOPPA is fully committed to supporting the national sustainability agenda.

DOPPA urged the new Minister to take these issues seriously and consider how they would affect smallholder farmers as well as other major industry stakeholders. DOPPA further urged that the Ministry of Plantation and Commodities continue to aggressively promote the MSPO certification for palm oil to gain better access to the global market, including the EU and other regions of the world, through various government agencies like MPOC and MPOCC.

In addition, DOPPA has consistently asked for equitable representation on the boards of the Malaysian Palm Oil Board (MPOB), Malaysian Palm Oil Certification Council (MPOCC), and Malaysian Palm Oil Council (MPOC), given that Sarawak is the largest oil palm-growing region in the country. To develop an inclusive and successful policy for the oil palm business in Malaysia, smallholders in Sarawak, which number over 40,000 farmers, need to have their voices heard and addressed at the federal level.