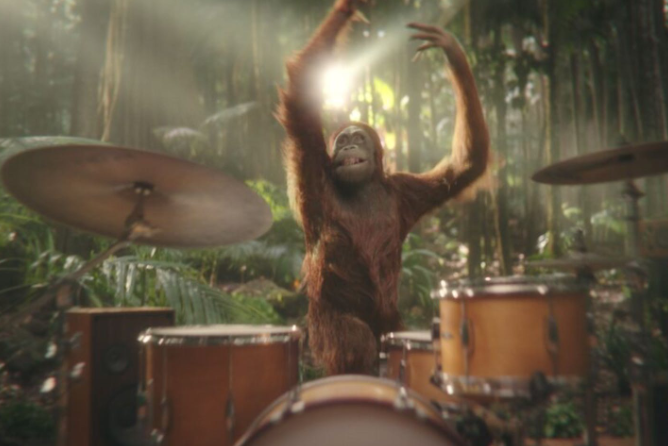 Should the Orangutans Drum in Celebration of Darrel Lea's chocolates?

Darrel Lea, the Australian brand which manufactures chocolates and licorice announced that it has removed palm oil from its chocolates.

The move was reviewed by Eco Business with contributing statements from a spokesperson for a palm oil company who lamented the move from a certified product in palm oil, to an uncertified replacement in sunflower oil.

Darrel Lea in trying to capture consumer sentiment copied the Iceland Supermarket marketing ploy and published its own cutesy animated video of an orangutan playing drums. The palm oil free campaign has received limited coverage at the time of this writing but it did get enough attention to beg the question of a palm oil replacement which travels thousands of miles to Darrel Lea factories.

Climate change is one of the biggest threats to orangutans and much of this can be blamed on fossil fuels which must have powered the transport to get sunflower oil from Europe to Australia.

Darrel Lea could have reduced the emissions of its vegetable oil by buying certified palm oil from neighboring countries in Malaysia or Indonesia but climate change and its threat to orangutans is a connection that most people fail to see. By comparison, declaring itself as palm oil free and showing a video of an orangutan playing drums is a no-brainer for marketing gimmicks.

Darrel Lea has not said anything publicly about its replacement for palm oil or whether it knew that climate change is a threat to orangutans. The company did prepare itself for questions on its sources for cacao, the main ingredient in its chocolates by emphasizing that it gets its main ingredient, cocoa, from “Cocoa Horizons”

“We are proud to announce we have partnered with the Cocoa Horizons Foundation to source sustainable cocoa for our entire range of chocolate products.
They are an independent, not for profit organisation that runs sustainability programs focused on social & environmental initiatives that benefit cocoa farmers, their families & the communities they live in.”

The website for Darrel Lea Australia pounds on this message of the corporate engagement with non-profits and “their work with cocoa farmers, their families and communities they live in” with extra blurbs like:

“Behind the chocolate you love, there are tireless farmers who grow and produce the cocoa that makes it so special. But life for these farmers can often be a struggle from harvest to harvest. Through unfair trading conditions with big chocolate manufacturers,(underscored by CSPO Watch) they have too few opportunities to take care of their families and their communities.
Darrell Lea knew this had to change.” 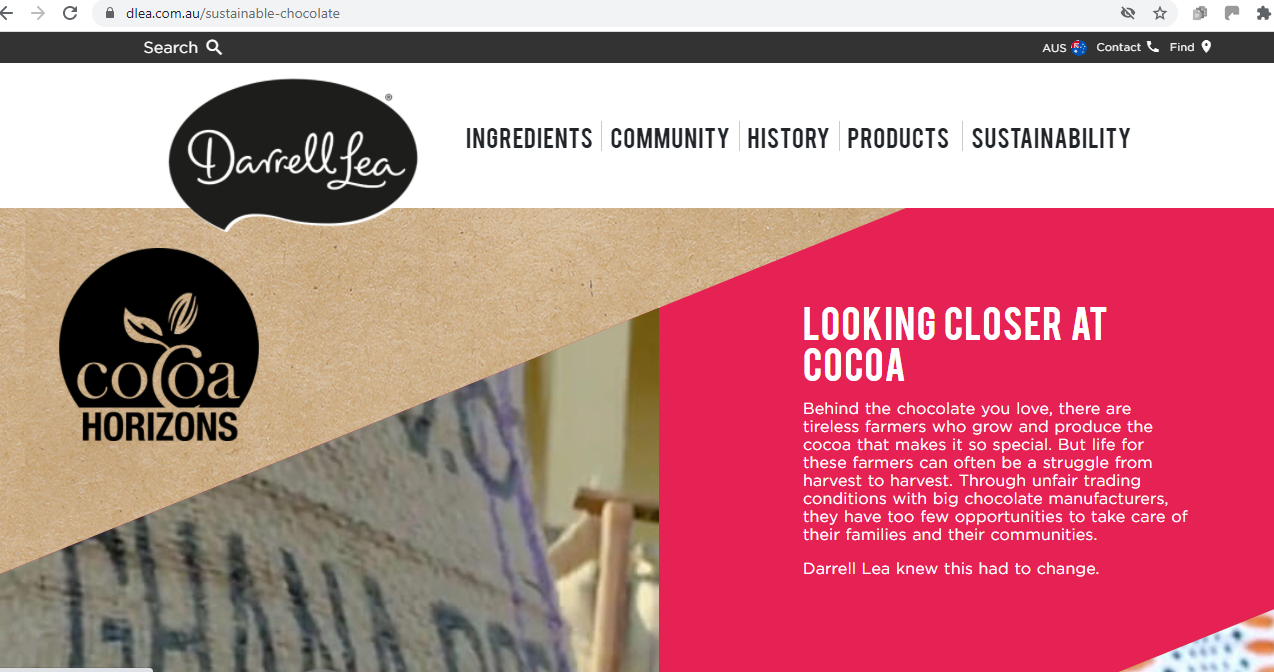 ​This may come as a shock to Darrel Lea if they find out that The Cocoa Horizons Foundation was created by Barry Callebaut to “help shape a sustainable future for cocoa and chocolate.”

To be fair, credit should be given where it is due. Barry Callebaut is addressing a problem which is bigger than orangutans which is child labor in cocoa. Child labor for a consumer product whose main sales drivers are children, is obviously a greater priority than orangutans. As this damning report on cocoa wrote:

“Chocolate is, for most of us, a guilty pleasure. We know we probably shouldn’t but, hey, it’s been a long day. Yet for thousands of children in the cocoa fields of West Africa, chocolate is a source not of pleasure but of hard, sometimes hazardous, work. The link between child labour and chocolate production is, lamentably, a long-standing one.”

“Swiss cocoa products maker Barry Callebaut said that 26% of the farmer groups from which it sourced products in 2018/2019 had programmes to prevent child labour, more than double the figure from the previous year.”

It is not known at this time, whether the cocoa for Darrel Lea’s chocolates come from the 26% of farmer groups who have “programmes to prevent child labour.”

“Twelve major players in cocoa and chocolate earlier this year united with public sector partners under the banner ‘Cocoa & Forests Initiative’, aiming to eradicate cocoa deforestation. The World Cocoa Foundation (WCF) member companies in March issued a joint statement of intent to end deforestation and forest degradation via the platform, in partnership with the Prince's International Sustainability Unit (ISU) and The Sustainable Trade Initiative”

The same debates on poverty alleviation, illegal deforestation by small farmers have gone on for years in the palm oil industry so what drove Darrel Lea to stop using palm oil instead of cocoa? Shouldn’t African primates whose habitats have been destroyed by cocoa receive the same level of care from Darrel Lea? Should the orangutans indeed bang their drums to cheer on Darrel Lea chocolates when 1.7 million acres of orangutan, tiger and rhino habitats were cleared for cocoa in Indonesia between 1988 and 2007 according to Mighty Earth?

There are no easy solutions for sustainable foods in an ever-growing human population. The simplistic option is of course the 100 mile diet where consumers eat only what can be grown within a 100 mile radius of the market. If Darrel Lea really cared about orangutans, the company would have to stop selling chocolates and focus on its licorice range which has a closer shot at being sustainable and orangutan friendly.

Published September 2020, CSPO Watch
Update October 27, 2020. The RSPO has terminated Darrel Lea's membership
This may affect Darrel Lea's performance in the market as the company has been vague about the sustainability of its palm oil substitute. For news coverage on Darrel Lea being kicked out from the RSPO click on the link below.
https://www.eco-business.com/news/australian-firm-that-removed-palm-oil-from-products-expelled-from-sustainable-oil-certifier/